Demos also available on both consoles to try before you buy

Time to lock ‘n’ load apocalypse fans! Publisher Assemble Entertainment and developer Pixelsplit Games today announced that the hugely popular over-the-top 8bit-style zombie shooter Deadly Days is out now on PlayStation and Xbox via the Microsoft Store. And, if fans want a taste of the whacky gameplay and epic zombie battles Deadly Days has in store for them, they can now also download a playable demo on both consoles!

Players can expect the same crazy antics that they’ve come to love from the PC and Nintendo Switch versions. Expect to see bizarre in-game items, powers, and quirky characters as well as the in-depth crafting feature that allows survivors to construct rooms with different perks to build weapons with specialized modifications.

Deadly Days is a one-of-a-kind zombie survival game that focuses on intense strategic elements, as well as the undeniable humour behind what a zombie apocalypse would look like in our modern meme-oriented society.

Key features of Deadly Days include: 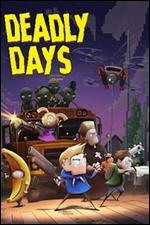