Bandai Namco has not forgotten those fans who are loyal to any of their Naruto games, and in particular the upcoming Naruto Boruto: Shinobi Striker, as they have added two new fighters to the game. Mitsuki and Sarada join the game along with a new Hidden Leaf Village map.

The new Hidden Leaf Village map will be the perfect place for beginners to get their bearings with the 4 vs. 4 team-based gameplay. This new map will include a modernized aesthetic found in the Boruto: Naruto Next Generations anime series. 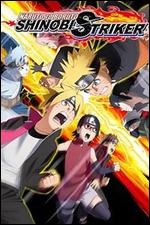