It seems that another game was launched over the weekend. Lichtspeer, a laser fueled action game infused with an exquisite cosmic soundtrack, launched on Xbox One (and Windows 10) in a Double Speer Edition, which includes a fantastisch drop-in drop-out co-op mode, where man and dog fight hand-in-paw against a horde of beasts from another dimension.

So, what can you expect? Imagine a land filled with Hipster Ice Giants and Wurst Zombies where players are mercilessly drained by tremendous duels! But wait! They can always call for help and summon Lichtmeister’s best friend - das Wunder Hund! He knows how to fight hand-in-paw, he can drop-in to kick some butts, and drop-out when he’s not necessary.

Here are some of the main game features that the PR/Dev-Team thought you should be aware of:

So there you have it, another game to add to your Xbox One gaming list. 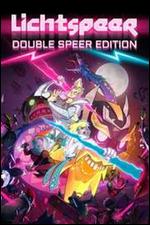