Indie game studio Serious Bros. today announced the console release date for their environmentally conscious strategy sim Imagine Earth, which launched on PC last month to a positive reception from fans and critics. The game will arrive on Xbox Series X/S and Xbox One on the 9th of July.

In Imagine Earth, players must protect and nurture a fledgling space colony while wrestling against the looming threat of climate change. Supply resources and energy, establish trade, research new technologies, form alliances and wage economic warfare in a real-time battle for sustainable survival.

The game, which entered early access in May 2014, kept growing with updates available almost every month until its final release last month. The final launch update has been one of the biggest to date and will be included in the console versions; additions include the ‘World Congress’ in freeplay and endless mode - a democratic allegiance containing every faction on the planet, brought together by the threat of a climate crisis and environmental collapse.

‘It was definitely scary, releasing our game into the wild after all this time,’ says developer Jens Isensee. ‘But the response to the PC release has been amazing. I’m so excited to see Imagine Earth hit the Xbox Console!’ 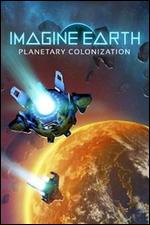