Seems like the team who developed State of Decay 2 is far from done. For a small fee, $4.99, you can download the already released "The Independence Pack" and celebrate July 4th in Zombie Style.

The pack unlocks an array of fiery new versions of vehicles, weapons and gear for your community all wrapped together with colourful gunpowder. The team also added to the existing game with Update 2.0, which features 20 FREE new missions, nearly 10 new weapons, a “Rare Books” trader for new skills and plenty of improved gameplay in honor of the Independence Pack for ALL players. 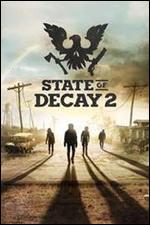