The Videokid brings ‘80s nostalgia to Xbox One Tomorrow

Roll up your sleeves, dust off your skateboards, and become the coolest kid in town in The Videokid, out tomorrow for Xbox One/ Windows 10. Publisher Chorus Worldwide is teaming up with Pixel Trip Studios to bring ‘80s nostalgia, sick tricks, smashed windows, and grazed knees to a whole new audience.

In The Videokid you skate through hazardous streets, sewers, and more to deliver bootleg video tapes, but you have to look super cool while you’re at it - weave through traffic, grind on cars, kickflip, ollie, perform mad combos and even avoid the gaping mouth of a sewer alligator, all while flinging tapes into your customers’ mailboxes.

There are hundreds of ways to die, and you only have one life - will you live long enough to catch all the ‘80s references to your favourite movies and TV shows? Accompanied by a pulsating 8-bit soundtrack (written by DJ Savant), The Videokid is modern retro at its most dewy-eyed.

The Videokid originally released on Steam in January 2017 and has enjoyed a ‘positive’ user rating from fans who know a good thing when they see it - after all, everything was better in the ‘80s. 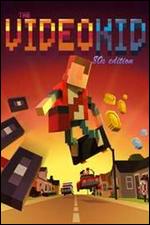