Sinner: Sacrifice for Redemption Now Out on Xbox One

New to the Xbox One is the boss battler Sinner: Sacrifice for Redemption. Not only can you buy the game in the Microsoft Store, but you can also access it if you are a subscriber to Game Pass.

You will join Adam on a journey through a macabre world set to a cinematic and haunting soundtrack to confront his sins in the form of monstrous entities from his past. Each of these bosses holds a powerful grudge and redemption comes at the cost of Adam’s strength, health and weapons as he must sacrifice some of his vitality or equipment in order to enter each boss’ arena.

Besting the specters of his former life requires as much strategy as it does skill, and mastering the game is no easy feat. The bosses can be confronted in any order, but with each fight the challenge grows and only the most adept will vanquish the manifestations of the seven deadly sins and open the way to the final boss.

A New Game+ mode adds replayability through unlockable equipment and a variety of game modes. Take on foes with only no weapon, dealing less damage and giving up the ability to parry, or wail on them with twin hammers to see all the endings more quickly. Up the ante in Nightmare Mode, a boss rush featuring all the monstrosities in rapid succession for the ultimate test of skill. 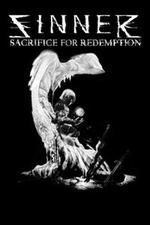