Mutant Football League is turning up the brutality of their hits and and cheap shots further with the release of the new Dynasty Edition, available now both digitally and at retail for various platforms, including the Xbox One. The Dynasty Edition includes all downloadable content that has been previously released for the game.

Dynasty Edition is the follow-up to 2017’s unapologetic and bloody Mutant Footbal League. The Dynasty Edition includes Dynasty Mode, a single player experience where you become the coach and GM of your favorite Mutant Football League team and take a group of unproven rookies and turn them into monstrous all-stars by winning multiple Mayhem Bowls over several seasons to become the league’s next Dynasty. It includes multiple season gameplay, player trades, cumulative player experience (XP), salary management, custom playbooks and free agent signings.

There is no doubt that this is a jam packed football game that should interest many fans of arcade like sports titles. 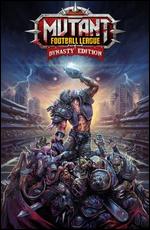