Storm Boy: The Game Now Available for Xbox One

Another new game alert for you fine folks. Storm Boy: The Game, an adaptation of the classic novella exploring the friendship between a child and his pet pelican, lands today on a few platforms, including the Xbox One.

Developed by Blowfish Studios, Storm Boy: The Game follows a young child living with his father on the South Australian coastline, who rescues and befriends a baby pelican, Mr. Percival.

Alongside the retelling of Colin Thiele’s beloved story, Storm Boy: The Game features a diverse collection of entertaining and relaxing minigames. Toss fish into baby pelicans’ mouths to help them grow. Play fetch with Mr. Percival and see how far he’ll go to retrieve the ball. Surf the sands, sail the seas, and soar the skies around pristine beaches and beautiful lagoons. 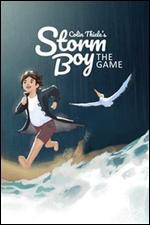