Ok folks, if you like a game that makes you think as you play, then we might have some news for you. The Turn-based tactical RPG, Fell Seal: Arbiter’s Mark is out now on various platforms, including the Xbox One. This recent release is Fell Seal’s debut on consoles.

Sow what can you expect from this game? Well, Fell Seal: Arbiter’s Mark takes you to the world of Teora, a land once ravaged by a brutal beast bent on destruction. Teora narrowly escaped its dire fate thanks to the Council of Immortals, who now rule the land through their mortal agents, the Arbiters. The Council and their Arbiters keep the peace by enforcing stability and order... but at what cost? Step into the boots of Kyrie, an Arbiter that sets out on an adventure to protect the land and uncover centuries-old secrets that could shake the very foundation of everything her order stands for.

The fine folks who sent the PR release wanted us to share a few key features of the game:

I am sure we should be reviewing this game, but hey, I have been wrong before. Keep an eye out for a possible review, and until then, game on my fellow Xbox One gamers. 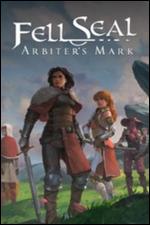