The Caboose Is Loose: Railway Empire - Complete Collection Out Now

THE CABOOSE IS LOOSE: RAILWAY EMPIRE - COMPLETE COLLECTION OUT NOW

Publisher Kalypso Media and in-house developer Gaming Minds Studios have today announced that Railway Empire - Complete Collection is now available! Since the series’ debut in early 2018, Railway Empire has captured over 100 years of steam revolution and delivered rail cars of content to players including 13 free updates, 8 extensive DLCs spanning iconic locations such as the Rocky Mountains, Sweden and Mexico, and brought to life 83 historically authentic locomotives. Railway Empire - Complete Collection reflects the constant improvement and new content developed together with the community, offering the most comprehensive railway tycoon experience currently available on PC and consoles.

It’s the Industrial Revolution, and the steam locomotive revolution is conquering the continents of the known world, with these great “Iron Horses” kick-starting a fierce race for supremacy on rails. Railway Empire - Complete Collection contains the original game plus all 8 DLCs: Mexico, The Great Lakes, Crossing the Andes, Great Britain & Ireland, France, Germany, Northern Europe, and Down Under.

You can expect our full review of this collection in the future as well. 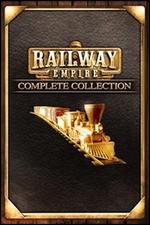