Blue Tongue Software of Melbourne, Australia is developing the game for release on the Xbox(TM) video game system and the PC. "Jurassic Park: Project Genesis" allows players to design and manage the most amazing dinosaur theme park the world has ever seen, or battle their way through 12 intense missions that will test their mettle against the awesome powers of nature and its most dominant creatures.

"The Jurassic Park franchise lends itself particularly well to the world-building genre of games," said Jim Wilson, president of Universal Interactive. "Jurassic Park: Project Genesis" transforms a highly recognized movie property into a style of gaming that allows players to recreate the very things about Jurassic Park they always loved to see on the big screen. This is the game that Jurassic Park fans have long been waiting for."

Both Jurassic Park and The Lost World: Jurassic Park are among the highest grossing films of all time. The Jurassic Park franchise has already enjoyed more than $250 million in promotional support and $2.5 billion in worldwide consumer product sales, establishing Jurassic Park as the ``premier'' and ``leading'' dinosaur brand the world over.
Source: http://www.xboxaddict.com/ 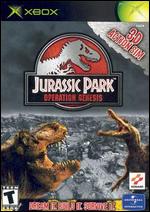 Xbox one no signal
Post by debrartin
0 Replies, 106023 Views