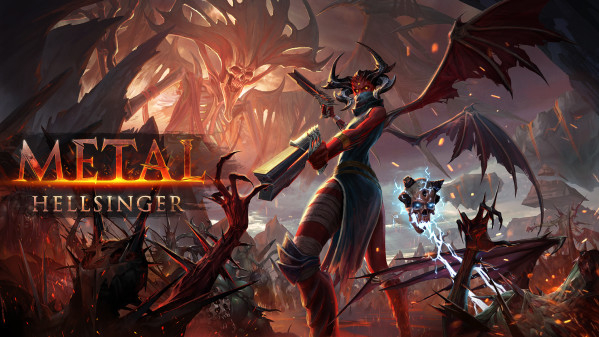 Combining the headbanging rhythm of metal music with the exhilarating action of a first-person shooter, Metal: Hellsinger is sure to get the adrenaline flowing. Here is a musical taste of what it will be like to blast your way through the depths of Hell.

Renowned FPS developer David Goldfarb of The Outsiders has promised that their upcoming rhythm shooter Metal: Hellsinger will be “more metal than metal”. Today publisher Funcom and the developers have released a gameplay-centered music video proving his point. Featuring headbanging vocals from James Dorton (Black Crown Initiate), Poetry of Cinder gives you a feel of the atmosphere that awaits you in the darkest corners of Hell.

Metal: Hellsinger is a rhythm FPS, where your ability to shoot on beat will increase your power and intensify the music. The developers have taken great care to make the music as central a part of the game as the action and have therefore created a whole new way of designing in-game music. Every level has its own song, and every song is divided into multiple layers, ranging from atmospheric background tunes to powerful metal anthems. Your performance determines how many layers of the song will be played, with the vocals kicking in as you peak.

The unique layering system has been designed all the while making sure the game stands firmly on its own two feet as shooter and ensuring you don’t have to be a metal fan to enjoy this game.

The video Funcom and the Outsiders released today features the progressive metal track Poetry of Cinder, written by the Swedish composer duo Elvira Björkman and Nicklas Hjertberg. It premiered on The Golden Joystick Awards and contains gameplay visuals mainly from the stage known as Voke – an icy prison where Hell’s disfavored are sent to rot in torment. These are the devils that were considered too vicious even for Hell, or who just crossed the wrong power.

Bringing the music to life is James Dorton, lead vocalist of Black Crown Initiate. “Working on Poetry of Cinder was an absolute blast! I’m grateful for such a unique opportunity, and had a killer time getting creative with this track,” he says. “I can’t wait to shoot some monsters to the beat of this song. Thanks to all involved!”

Metal: Hellsinger is due to release on PC, PS4, PS5, Xbox One and Xbox Series X in 2021. The game will be optimized for next-gen consoles, with improved visuals, up to 120 frames per second and drastically reduced loading time.

Xbox one no signal
Post by debrartin
0 Replies, 39028 Views