Mercenaries 2: World in Flame is fun. That’s really all you need to know. But, I suppose if you are one of those pushy folk who has to have more to go on than just "fun," here’s a little bit more deets. Mercs 2 is pretty much finished. It’s just going through some final bug squashing, but is otherwise ready to be pressed and shipped to stores in time for its late-August release date.

The action title, which is set in Venezuela, features a fairly massive world. The E3 demo only has half the game world open, but there were still tons of things to destroy and side jobs to complete. I won’t go into any great detail on mission structure or gameplay mechanics, because we’ve covered those to death. The only thing that’s changed from the last time I played Mercenaries 2 is the framerate (much better) and the AI (also better).

But here is what is different. For E3, I was given the reigns of a character with unlimited cash and access to every item in the game. And that meant I had my hands on the tactical nuke. This is something usually reserved for very late in gameplay as a reward for all the hard work you’ve put into killing people.

To call in the nuke, hit down on the d-pad and select it from the quick menu. You’re then given a laser pointer to aim at where you want the nuke to hit. This small nuclear missile isn’t perfectly accurate, but as long as it gets close to the target, it’s going to to get toasted.

Of course, you want to get back once you’ve spotted the place for the nuke to strike. Put on your shades, because when the nuke hits, there’s a blinding flash of light. The mushroom cloud that spawns is phenomenal. The massive orange cloud hangs in the air for a bit before dissipating and leaving nothing but the sight of total devastation. It’s a satisfying way to clear out some buildings and just an example of the good times waiting to be had with Mercenaries 2.

There’s not too much to be said for Mercenaries 2 at this point. Now that I’ve seen a nuke go off and completely obliterate a neighborhood, I’ve pretty much seen it all. Or at least thought I had. Then, while in an attack chopper flying about Venezuela, I cam across a large island (full of pirates) that I’d never seen before. It’s not as if I hadn’t gone looking for pirates, it’s just that there’s so much real estate in Mercs 2 that it’s easy to miss things -- even entire islands. Even islands with pirates.

Mercenaries 2 has a few more weeks of polish before heading out the door. I can’t say whether or not the contracts and overall story structure will be satisfying, but I assure you that free-roaming destruction is going to be a blast. 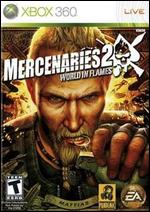