Content: C&C Red Alert 3 Demo
Price: Free
Availability: All Xbox LVE regions
Dash Text: [ESRB: T (Teen) VIOLENCE] Red Alert has arrived on Xbox 360! Battle alongside your friends and Hollywood stars as the bestselling series of the C&C franchise makes its 360 debut. Wage war solo or co-op on Xbox Live on land, sea, and air for control of the world with 3 epic factions! RA3 features the fastest & most precise RTS controls to date on console-plus the biggest Hollywood cast ever in gaming, not to mention War Bears, psychedelic Japanese schoolgirls and dozens of other units! This SP demo features the game’s cinematic opening, 1 campaign mission from both the Soviet and Allied campaigns, and an interactive tutorial. RA3 game features 3 campaigns (solo or co-op online), a skirmish mode against 9 formidable commanders, and multiplayer over Xbox LIVE. 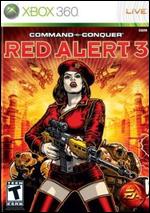