Thebullet-ridden rap star revealed the info in a conference call promoting his new game 50 Cent: Blood on the Sand

He told journalists: "My relationship with THQ, you’ll see Saints Row. I’m optioning the rights for that right now." Both Blood on the Sand and Saint’s Row are THQ games.

The later title (and its sequel) would seem a perfect fit for self-styled gansta rapper Fiddy, with the game’s action revolving around gang warfare in the crime-ridden city of Stillwater. 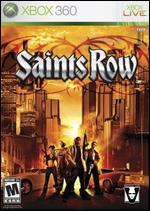