Capcom i s pleased to confirm that the highly-anticipated Bionic Commando will ship to retailers in  North America on Tuesday, May 19, 2009 for both the Xbox 360 and PlayStation 3. Reloaded for the latest generation of hardware, Bionic Commando sees the return of the ultimate fusion of man and machine as Nathan Spencer is back as a government operative who, after distinguishing himself in a fierce conflict against the Imperials, is betrayed and falsely imprisoned by the very people he unquestioningly served.

However, when bio terrorists detonate an experimental device over Ascension City and then occupy it, there is only one option open to the authorities – reactivate Nathan Spencer.  The upcoming new generation game, first released 20 years ago with the 8-bit original on the NES, is making a big comeback when it hits retail shelves this spring as it features an in-depth multiplayer mode that will have you swinging with friends around the globe via Xbox Live and the PlayStation Network. 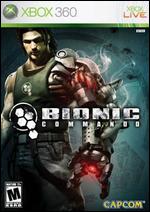