New Songs for "Lips" on XBL

When the sun gets too hot outside, come in from the heat and get your chill on with new Game Add-on songs for "Lips," the singing sensation exclusive to Xbox 360. This June, everyone’s favorite tunes spanning multiple genres will be available on Xbox LIVE Marketplace and the "Lips" in-game Get Music Store to expand your music collection with even more variety. So whether you and your friends like to belt out the high notes or rock to some classic jams, "Lips" and its catalog of music is sure to be a hit at your next summer fiesta.

During the month of June, create new fun summertime memories crooning Keane’s smash hit "Somewhere Only We Know"; stop, collaborate and listen with Vanilla Ice’s classic "Ice Ice Baby"; relive the 80s with "Joey" from Concrete Blonde; or form your own girl group with "Freak Like Me" by Sugababes for 160 Microsoft Points each. With a wide selection of songs available and wireless light-up microphones, "Lips" has something for everyone as it brings friends together this summer.

Available June 12:
Freak Like Me – Sugababes
Love You Anyway – Boyzone

"Lips" singers know using the game’s motion-sensitive LED wireless microphones are the perfect way to show off their creative energy by poppin’ dance moves or adding percussion. So to further celebrate the "Lips" franchise, Microsoft teamed up with CrystalRoc, makers of customized music instruments for artists such as Rihanna and Leona Lewis, to create limited edition "Lips" microphones made with CRYSTALLIZED – Swarovski Elements. Each microphone is made with 520 delicately placed gems, with a pair totaling 1,040 Xilion Rose Flat Back crystals. These ultra rare sets are not available for retail sale, but a few lucky fans will be able to win them through upcoming contests and giveaways in North America and Europe. Now you and your friends can definitely rock out and sing in style!

More information on "Lips" is available at www.xbox.com/lips. 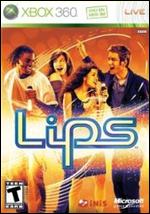