Developer Keen Software House has announced its first project, an Xbox Live Arcade and PC game called Miner Wars. Set in outer space and beneath the surface of distant planets, Miner Wars offers both a single-player and an MMO experience. Environments will be destructible, and players must pilot an advanced mining vessel in order to dig tunnels, harvest ore, discover alien artifacts, and blast enemies. Many types of missions must be completed, including "rescue, exploration, revenge, base defense, theft, transportation, stealth, search and destroy, pure harvesting, racing or just flying around and destroying everything you see." Some missions are single-player, and some are multiplayer.

In the year 2061 space mining has become a major priority for explorers. Players control adventurer Marco Polo, after he and his brother, Mario Polo, are attacked by a group of Space Peace Activists. The Activists are apparently a bunch of hippies who don’t want man drilling in outer space. There are many factions, corporations, and black market dealers players can join up with. 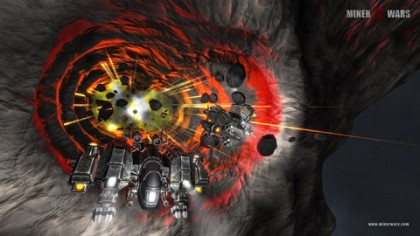 Miner Wars
The open world is persistent and is made up of millions of kilometers of space. Keen says you can dig a tunnel, fly off somewhere else, and return a month later to find your work still there – if another player hasn’t messed with it.

The Miner Wars will begin this fall.