Army of Two: The 40th Day Gets Release Date

Salem and Rios will be bringing in the New Year for the games industry.
Electronic Arts has revealed Army of Two: The 40th Day will get a North American release on January 12, 2010. The game will be released four days earlier in Europe on January 8.

The company also revealed the game’s pre-order bonus, which gives players early access to the multiplayer mode ’Extraction.’ The mode will be unlocked for everyone one month later. EA says ’Extraction’ "pits a team of four players against a series of unique enemy waves as they move from point to point in the ruined city." 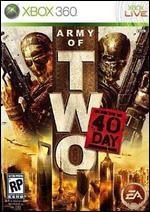