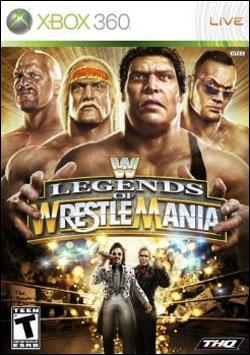 On March 6th , THQ invited XboxAddict to come to their Los Angeles offices and get a preview of the upcoming wrestling title, Legends of Wrestlemania.  The game focuses on the great wrestlers and matches that are embedded in WWE history during the time period between Wrestlemania 1 to Wrestlemania 15.   Many legends from past and present generations, a total of 40, are included in the game which include the likes of Dusty Roads, Sgt. Slaughter, Hulk Hogan and others.   Also, included in the game are 4 managers that are iconic in WWE history and they are:   Paul Bearer, Jimmy Hart, Bobby Henan, and Mr. Fuji.  These managers play an integral part in the game, and I'll get into a bit more detail later in the preview.   There are plenty of venues including an outside arena at Caesar's Palace.


So lets discuss the event a little before getting into the depths of the game.   At 9:45 am we made our way over to THQ and received our press passes along with an extremely satisfying breakfast.   PR Reps Jaime Jensen and Raha Bouda introduced the game and the day's general itinerary to us.  Once everyone was finished with breakfast, Jaime introduced us to the the development team members whom would be showing us the game and its features.  Those folks were:   Paul Edwards, Corey Ledesma, and Robert Lash.   They were all helpful and quick to answer any questions we had about the game.


The demonstration started out with Paul and Robert going through some of the features and game modes we would be seeing in the final retail version of the game.   Robert was the man with controller in hand and demonstrated the game and controls.  The first thing that was shown to us were the game modes.   One of the prominent game modes was the Wrestlemania Tour Mode which included the ability to Relive, Rewrite, and Redefine memorable Wrestlemania matches in WWE history.   Again, these matches took place during the time of Wrestlemania 1 to 15.

First up lets discuss the Relive feature where you basically take on the roll of the winner and recreate the match and result the way it happened in real life.  There is a checklist detailing specific things that should happen in the match to create a more realistic representation of its real life counterpart.   You'll receive points towards a final score once the match is over and these points will open up unlockable items in the game.


The second mode is the Rewrite feature where you jump into the role of the real life loser.   Your ultimate goal is to change history by winning the match with the predetermined loser.   Can you imagine if the Iron Sheik beat Hogan, or Bret Hart won against Sean Michaels?   Well, you can make that happen.   Once again you'll have a checklist of things you need to accomplish in order to achieve the highest score and open up unlockables.


The final mode is the Redefine feature which allows you to pick any prominent Wrestlemania match and rather than using the loser of the match, you can bring in any wrestler from the game's roster.   As with the other modes, you'll be working towards a final score that unlocks special items within the game.


One of the extremely cool features of the game is the movie montages for each historic match.   The WWE personally created each of these montages detailing the feud that lead to the Wrestlemania match.   You'll see footage from the WWE archives that has never been released onto any DVD previously.   The montage will detail each wrestler's actions and attitude towards their opponent and why the animosity existed.   These montages are so well put together that all gamers regardless of age will learn what lead to the match and why the wrestlers were at odds.   The prime example used for our demonstration was the Hogan vs Slaughter match from Wrestlemania 7.


Once again as stated earlier, Rob demonstrated the game and showed us the detail that went into the game including the era specific crowd.   You'll see fans with mullets, Bret Hart T-Shirts, match related signs, etc.   As Rob was finishing up the match someone began banging on the conference room door and causing a complete ruckus.   He was yelling and screaming for Hogan and we all got a chuckle out of the display and chalked it up to a THQ employee having a good time.   To our surprise the door came bounding open and in walks WWE Legend Sgt. Slaughter.   After his little in character promo he then began to talk about how excited he was for this game and the ability to alter the results of the Hogan match.

Sarge and ourselves then once again focused our attention on the developer's demonstration.   The pressure was now on Rob to make sure Slaughter won the match versus Hogan.    And to Sarge's dismay he failed miserably.   At this point Sarge took charge and decided to take control of his own character versus Rob and Hogan.    Sarge admitted it was his first time playing a video game, but did surprisingly well once he learned the buttons on the controller demonstrating that the game was definitely pick and play.   With a little submission by Rob, out of respect of course, Sarge won the match versus Hogan.   I think Rob may also have had some fear for his life as well since Sarge was only about 4 feet away from him and much larger.


So now lets get back to some of the game features that were made evident to us.   As stated, the control scheme for the game is quite basic and nostalgic at the same time.   You'll only use the left stick and the buttons to play the game.   Stick movements and button combinations will perform different actions such as taunts, special moves, and finishers.   There is also a chain linking system for combos in the game where an icon of a button will be displayed on the screen and you must hit that button in order to carry on the combo.   When playing with 2 human opponents this turns into a mini game of sorts where the both players have the opportunity to push the button.   If one player is within a grapple hold, they can reverse the hold or breakout of it by beating the other player to the button press.   The control system works very well with the game and is a welcome feature.   Veterans of the SVR series will quickly notice that there is nothing in common with the control scheme, and as stated there is nothing wrong with that at all.


After lunch we got a chance to get a hands on with the game ourselves and I have to say I had a great time with it.   Each wrestler has his original entrances and theme music as well as WWE created entrances for those that wrestled when entrances were not prevalent.   As stated, you'll also get to see plenty of detailed footage pertaining to each character participating in a Relive Wrestlemania match. I got a chance to play against the Sarge himself as well and it was quite enjoyable.


As I played through many of the matches, I noticed how all the details that have gone into this game. All the animation and character models are unique to LoW.   There is no common ground at all between SVR and LoW other than the WWE representation which is a great thing because this game is unique in itself.   Speaking of SVR, if you own Smackdown vs Raw 2009 you will be able to import all your wrestlers into LoW including your created wrestlers.   That will give you a roster of well over 100.

I found the managers to be quite influential in the game as they always were back in the day.   The managers will interact with the opponent when their wrestler gets into trouble or is in danger of losing the match.   Jimmy Hart will jump on the ringside apron and scream into his megaphone, or Paul Bearer will hold out the Urn in which wrestlers quickly back away.   Mr. Fuji will blow chalk into a wrestlers face, and Bobby the Brain will just raise a ruckus.   You can grab hold of managers and drag them into the ring as well as beat them down off the apron.   But if you get distracted, you will be locked into an animation with that manager that allows your opponent to attack you from behind.   In my mind this is a phenomenal and quite comical feature.


LoW support up to 4 players online which means you'll be able to hook up with 3 other friends and get into some Royal Rumbles, Classic Tag team matches, and may match creations of your own.   I mean how awesome would it be to take both DX characters of the mid 90's and pit them up against their modern day characters?


The developers were strong on the point that LoW is not a simulation.   The wrestler models are created larger than life to represent their iconic and legendary stature.   The game modes include the standard Relive, Refine and Rewrite but you'll also get a Legend Killer mode that is somewhat of a Gauntlet style game.   For those wondering, there are also creation modes that allow you to create a legend, movesets, entrances and tag teams.


I could go on and on about how much fun the game was to play and the control scheme was an extremely welcome functionality.   There are so many small things that can be mentioned but we'll get more in depth with that when the review is written in late March.   But honestly, you really should give this a try yourself.   There is a demo available currently on Xbox Live and you should definitely check it out, but keep in mind that it only scratches the surface of this game.   Old fans, New fans and younger generations should greatly enjoy this title when the retail version hits shelves on March 24th.. If you consider yourself a wrestling fan, then this title should be on your radar without a doubt.   My experience with the title was only positive and I thank THQ for the opportunity to play it and meet one of the greatest legends of wrestling that has graced the ring.