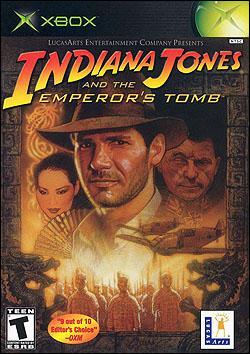 ?We meet again Doctor Jones!? Indy made his first appearance in video games back in the Atari 2600 days (I think), but I?d rather not bring dark light on a superb new Indiana Jones game from Lucasarts! Gamers that have played Buffy: The Vampire Slayer will feel right at home with Indy (It uses the same engine). And superb is right, this game will grab you by the neck and take you on an adventure that you?ve always craved on the Xbox! Indy style! Things very different with this re-introduction of an Indy game to the public, and now on the Xbox (and PC)!


The Xbox has been hurting for a title of this genre since its very beginning, and IJ:ET has everything; graphics, the unique ?Indy? sound, awesome storyline and a very successful property license. IJ:ET encompasses everything that is cool about the movie trilogy?Indy?s whip, the hat, Harrison Ford?s voice?.the whip comes in handy in the most strangest places. But, hey?it works and it?s all good! IJ:ET basically put you (the gamer) right in Indy?s shoes!


Final word?.The Emperor?s Tomb is everything a killer Indiana Jones game should be, period.

The gameplay is smooth and silky. With awesome level design and the fact that they captured that unqiue Indiana Jones thing (whatever it is). I imagine wasn?t an easy task, but they (The Collective/Lucasarts) have pulled it off without a hitch. The combat system is well done, with its unique lock-on system makes kickin? butt a cake walk.


Now for the very small, but oversee able pet peeves, I sometimes had trouble getting the whip grapple onto the crocodile heads (You?ll see what I mean when you buy the game), and switching weapons really fast is not there. No game is 100% perfect; Indy comes awfully close to being one though. This is a near perfect game for the Xbox.

Can you say Xbox graphics?!?! WOW! This is a visually stunning game with its huge environments that are beautifully rendered. Two thumbs up. Everything moves fast and smooth on the screen, never saw a single frame hiccup. Not much else to say hear, but...

First off, let me talk about Indy?s voice. Most developers mess this right up; they tend to hire these cheap imitation voice actors.


But, I guess Lucasarts got someone that could talk just like Harrison Ford (great job!)?Mind you at the time of this review all I got was a early build and could check the credits to see it really was him, but it doesn?t matter because it sounds JUST LIKE Indiana Jones or rather Harrison Ford!


And, let?s not forget the musical score of John Williams (the genius) which really completes the overall sound package. Excellent Work!

Suggestions:
Keep up the good work!