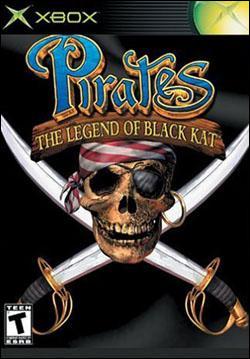 I know what you?re thinking; you?re thinking I?m going to be using those clich? pirate terms like swashbuckling, walk the plank, shiver me timbers, arrrgh and maybe even yarrrgh, well guess what? Your right, but I refuse to use poop deck. All of these terms help me to describe Pirates: Legends of Black Kat because it contains all the elements of pirate lore you would expect out of a pirate themed game.

As sexy pirate Katarina de Leon (a.k.a. Kat) you set out to avenge her father?s death, thanks to the scourge Captain Hawke, and to discover her mother?s hidden fortune, also completing other quests along the way. You must find the chartstones to point the way, but only after setting sail for the high seas, exploring mysterious islands, unlocking treasure chests and fighting a variety of beasts and boss monsters.

Peg-legged pirates, squawking parrots, voodoo headhunters, buried treasure, ship battles, compelling storylines and a riveting musical score; this game does a really good job of capturing the essence of a true pirate fantasy. Does Pirates: The Legend of Black Kat deserve to walk the plank? Not at all. Don?t get me wrong; this game is not perfect, but what it offers is truly a fun, at times, addictive gaming experience. For me this was a rental, even a re-rental, but for any true pirate adventure lovers out there, you might consider adding this to your collection. I played this game from start to finish and I have to say it has one of the best finales I have ever seen in a video game with a surprising little twist at the end.

This game features 2 very different gameplay modes. The first is sea mode where you control Kat?s ship to sail back and forth among the 26 Islands. You start with a basic 4 cannon pirate ship but once you advance in the game and collect enough treasure you can upgrade. The ship also has ramming attack capabilities and features power ups when found, such as the Neptune lighting attack. The ship is fast and turns on a dime, which is not that realistic, but who wants to control a slow moving vessel.

The second mode is land mode and occurs when you dock the ship at an Island port. In this mode you are basically sent on a series of hunting quests and involves long stretches of running around and searching which is really not that hard considering you just follow the beaten path. The odd time you venture off the path to find buried treasure which is nearby when the controller starts to vibrate more and more.

To sum it up you find an item, return to a specific area, go to next area, fight monster boss, move on to next world etc. This aspect is one of the fundamental flaws of Pirates; a lot of running around with not a lot of variety in land mode gameplay. The game is not that difficult because it is primarily a hack and slash, but there are a variety of mental puzzles to be solved especially trying to figure out boss monsters? weaknesses and it does feature several difficulty levels to choose from.

Both in sea mode and land mode Kat has an arsenal of weapons at her disposal such as smoke bombs, throwing daggers and poison darts. A unique feature about this game is that Kat can pick up a variety of spells along her journey, some of which are crucial to completing the game. The only problem I encountered with so many weapons in inventory is cycling through them all especially when caught up in a battle.

What I especially liked about Pirates is that most of the games objectives are revealed near the beginning of the game so you never really know which ones you are going to complete first, which adds a nice element of surprise to the game. Another feature to mention is multiplayer ship battle mode but it is nothing to brag about.

The crystal clear waters in sea mode make you feel like you?re in paradise. You can see sunken ships, schools of fish and the occasional whale underwater. The entire environment in sea mode looks fantastic especially the blue skies, sandy beaches and sunsets. Sea mode also has a rotating camera feature, which will take some getting used to. This allows you to do a complete 360 around the ship with the ability to zoom out and zoom right in to see everyone on deck. In land mode this is a different story because the graphics are pretty average and not very detailed. The environment close to Kat looks pretty good but looses detail the further out. Kat is one fine looking pirate and has one heck of a pirate?s booty, she gives Lara Croft a run for her money, but overall the character models are pretty average with fluid motions.


What an excellent musical score. The music in Pirates adds so much to capture the whole swashbuckling theme and feel, everything you would expect from a pirate movie. Based on the situation the music will build the momentum or capture the moment perfectly, everything from an approaching enemy ship to defeating a boss monster. The sound effects are equally as good such as the boom of the cannons, clashing of swords, screaming banshees to the groaning and creaking ship boards as it sways back and forth at sea. Let?s not forget this game features 5.1 Surround Sound.


Suggestions:
Mix it up a bit. Running along a beaten path can get tiresome after awhile. How about exploring hidden caverns and dark caves. A swim feature would be nice, to explore sunken vessels, search for underwater treasure and maybe battle a giant squid. I look forward to the next installment of Pirates if thar be one?arrrgh! Sorry, that one slipped out.