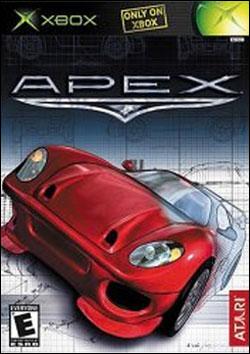 Apex Racing is a mediocre racing title for those people that want to kind of design cars and not really build an automotive empire. Apex racing is a typical racer with big claims of revolutionary game-play that quite frankly, it just doesn?t deliver it. The concept of building a vast empire of concept cars is hampered by the lack of end user creativity throughout the game. So for those of you who are looking for a visually good looking title, with mediocre game play and sorry sound, this is the game rental for you.

You got two choices of game play, Arcade and Dream Mode. In arcade, you can do time trials, single races, and multiplayer. There is no link or Xbox Live option unfortunately. Most tracks and cars must be unlocked to really enjoy any part of the arcade mode and to unlock them you have to do well in the Dream mode.


You begin Dream mode by starting your own car manufacturing plant. You don?t get to decide anything like a location or type of building. Your car builder and you go inside to take a look at the place. Behold, blue prints left over from the previous owner to help you get started on your venture of car design and selling your product by racing. And the blue prints are the biggest beef I have with the game. All of the blue prints are of pre-designed cars that you have no say-so in designing except for the color. You choose a design, and six months later, your car is built. To be able to build better cars you have to race and do well in the races. The higher you place in the races the more sales you get for your car. The more sales, the better the blueprints you get. As you complete races and gain more sales, your factory expands just like any business would. Winning is the key all racing games, big surprise. You also get a test track to test out your cars settings and upgrades from racing. You can only change whether you car drifts or not, the gear ratio and the spoiler setting; low, med, high. Any other change or upgrade is done by your car builder.


Depending on the track and the experience you have will decided what type of car you use and what it looks like. Certain races have different car requirements; Roadster, Sports Car, Super Car. As with most racing titles, you start in the back of the field of cars, which is only 6 counting you. The controls are super simple and fully customizable. The steering reaction is too sensitive for my taste but is manageable. The AI is simple and sometimes either aggressive or just in the way and don?t react to your maneuvers. More than half of the track I didn?t have to use my brakes, I just let off the gas or pumped it. Running into the grass causes you to automatically slow down to a snails pace which is really a pain when trying to pass a car on the inside. Any damage done to your car does not affect your performance and doesn?t really show on the car. Getting hit from behind give you a good boost of speed and can cause you to go out of control and getting hit in the side or hitting someone in the front causes the grass affect. The cars handle well if you know how to drive them and maintain control. You should be able to keep up with the AI and most of the time, finish well if not win.

The in game graphics aren?t the best in the world, but they are up there. I would have to say that Apex looks like a mix between Midtown Madness and Need for Speed HP2. The cars look smooth and shiny and the levels are clean with no frame drops. The tracks tend to be recycled, meaning that the layout of the track may be different but its most of the same models used throughout each course in usually the same places. Don?t get be wrong though, there are a lot of locations to play and several track layouts, just expect to see a lot of recycled scenery.


The concept car models resemble hybrids of automobiles of today while not leaning heavily on the futuristic side. There are damage models for each of the concepts, but the damage is hardly noticeable and are poorly done.


Ugh, this is by far the worst part about this game. The voiceovers are ok, nothing spectacular. The in-game sounds are rather plain for a racing game with generic sounds for most every car. The tunes that come with the game are an annoyance and keep repeating during racing without ever advancing to the next track. You can make custom sound tracks but that?s a waste since the same track is repeated.


Suggestions:
Allowing people to fully design a car would be awesome. Being able to pick the location of your factory and then racing in that state or country would be cool. A rearview mirror would help with collisions from behind. Slowing down in the grass automatically shouldn?t even be there. More tracks and more original track designs would spice up things. Better sounds effects and soundtracks. Damage to cars should affect performance and visual damage needs improvement. AI always has room for improvement like when they slow down to allow you to catch up. I don?t like that, if I lose, I lose for my mistakes. Xbox Live support would be awesome for this game and having an online world where people compete to sell their cars would rule.