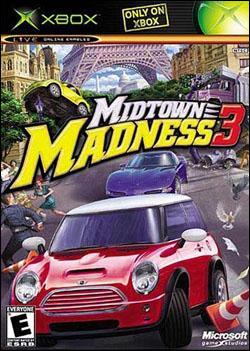 First off, I would like to let you all know that I personally consider myself somewhat of a Midtown Madness freak/expert, due to the fact that I?ve been playing and creating content this fabulous series since version one. The way I got so deeply involved with it was, that I slowly found myself wanting to build additional cars for the game. Next thing I knew, I was building a 1982 Delorean DMC-12 for both Midtown Madness 1 & 2 and spending countless hours figuring out 3D Studio MAX, and testing the car on and offline. Much to my chagrin, I slowly discovered the massive amount of cheaters that were out there, people hacking the car files to the point of not wanting to play online anymore. This is where hopefully the Xbox and Xbox Live has finally hepled to solve that annoying problem that we all faced in the past - Cheating.


This version of Midtown Madness has been developed by the famous Digital Illusions, makers of great titles such as Pinball Fantasies for the old Amiga and the more resent Rallisport Challenge. The previous installments of Midtown were developed by the talented guys over at Angel Studios, who were quickly snatched up by Rockstar games after the acclaimed Midnight Club. This version of the Midtown Madness series features a nice pile of brand new options, and Xbox Live baby! The two most noticeable features are that the graphics look incredible and a pile of new single player games to choose from. The career mode, this is where you should be able to unlock most, if not all of the cars in the game. MM3 lets you pick from over 30 cool vehicles such as a garbage truck, a taxi cab, a bus, a Austin mini and few others!


What?s truly remarkable is that Digital Illusions has done a wonderful job retaining the essence of the previous Midtown Madness titles. Although they are not the original developers of the previous two Midtowns' (PC only), they?ve still successfully managed to keep that unique and high-end ?over-the-top? unrealistic gameplay we?ve all come to love.


My overall impression of the game is that, even if you don?t have Xbox Live (where the game truly shines), you?ll still have a great time exploring the two huge cities and watch people jump out of the way while you cruise at high speeds on the sidewalks.

The controls are extremely easy; they use the same control scheme that most other Xbox driving titles have adopted. Let me make this clear. If you are looking for a car sim (a.k.a. APEX), you are looking at the wrong game. The physics system is so ?out there?, ?over-the-top?, unrealistic and exaggerated that it really let?s the uniqueness of the game really shine through.


The single player modes range from a variety of over 50 missions and 14 careers, from being a pizza delivery man, a limo driver and even a cop. This really forces you to love the crappy cars as you must shuffle through all of these in order to get those cool unlockables.


But where you're going to get the best bang for your buck (as stated above) is with the all mighty Xbox Live gaming modes. The classic ?Cops and Robbers? is back. For those of you who are new to the series and don?t know what it is, imagine capture the flag but with cars. Rabbit is a new mode, where you have to steal the rabbit (don?t ask) from the other guy, but when you're all playing with a super slow vehicle like the cement truck, it's pure slow fun!


The Xbox Live in-game voice ?trash-talking? feature in Midtown 3 is really cool in that it uses a type of positional audio. Meaning, that if you are clear across town, you won?t hear the others in the game yapping away until are about a few blocks away. Now that?s cool!


Also, just sit tight, because where the old series of the game really came alive is with all the add-ons! Back in the day, users created their own cars, and even whole cities! It's safe to say that in the very near future Microsoft/Digital Illusions will have downloadable new cars, and possibly some new courses for the checkpoint races, and maybe even a new city for Xbox Live subscribers.


The reason that I?m giving MM3 high marks on the replay value is that the city is full of hidden short-cuts and insane killer jumps that you?d never take in real life. This is why we play games kids!

Near perfect, is all I have to say about the graphics! Let me tell you that the Midtown Madness series has never looked better! This is the way this game was truly meant to look. They really seem to have pushed the Xbox to the maximum with this one though the game doesn't drop any frames at high speed or even while the screen is filled with cops and pedestrians. On a side note, if you look very carefully you?ll see the odd person walking on the sidewalk with an Xbox package in their hands, talk about details!

The sound is great, Dolby Digital 5.1 all the way! You hear people yelling at you in French, and people telling you ?turn your lights on?. And let?s not forget, the unique sound that your car makes smashing into trees at 60 miles per hour. OH! And popping the occasional fire hydrant.


The game does support in game soundtracks, and let me tell you this?there is nothing more beautiful than listening to Joe Satriani?s ?Surfing With The Alien? while blazing through the streets of Paris with your Mustang, now that just rocks!