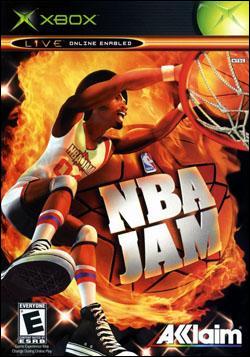 If you miss the phrases "Boomshakalaka" and "Is it the shoes?" coming out of your TV, then you're gonna love the new NBA Jam! Not only is the original commentator, Tim Kitzrow; back in the hot seat, but the latest NBA Jam title is definitely the greatest. With all your old favorite dunks and stars of the NBA, but with lots and lots of new features and unlockable content. The arcade classic has just gotten a whole lot better!

The gameplay in NBA Jam is a lot like previous versions, except one major difference. The game is now 3 on 3 instead of the usual 2 on 2. Sadly there is no option to switch to the classic 2 on 2, which would have been nice. At first, the added player to each team is a bit confusing and frustrating. After a game or two, you'll get used to it and be taking advantage of the added player every chance you get. One addition to the gameplay is the use of Jam Points. At the top of the screen in a game is a jam points meter. To get jam points, you have to do things such as steal the ball, make a basket, or perform crazy dunks like a triple ally-oop. When you fill the jam points bar, you have the ability to activate a hot spot (introduced in NBA Jam T.E.) worth between 3-7 points.


Jam points also accumulate and after each game you can use them to purchase unlockables in the Jam Store. Items such as new courts, cheat codes, and new attire for existing or your created characters, which is also a new addition to NBA Jam. The create-a-character option isn't as expansive as other games, but it does its job. You can also use your jam points to increase your created character's attributes or make a dream team consisting of all your favorite stars.


The best new feature to the series is the Jam Tournament and Legends Tournament. The Jam Tournament pits you against all 29 NBA teams in order to make it to the top. The Legends Tournament is what really makes this game stand out above all the others. In order to win, you must play teams of the best players from the past to the present. You start out playing against Pre-70's teams. Not only are you playing players whom retired MANY years ago, but also you see the game as it was back then, Black and White! You also get to listen to music from that time period and an old time style commentator. As you beat all the teams in a time period, not only do the characters become playable, but you move on and the display, music, and commentator all change. One complaint though is the AI is really cheap.


Every chance they get they steal the ball or knock you down. Eventually you will learn their tactics, but it can be really frustrating at first. And for people who want to pick up the controller and have a good time, there unfortunately is no option to switch the difficulty. The default camera can also be annoying at time, but luckily there is the option to change that. My biggest complaint of all is that it's not playable on Live. They added the ability to download content in the future, but no play on Live? WHY???????

The graphics in NBA Jam are nothing groundbreaking, but I wasn't expecting them to be. A game such as this, which doesn't try to be realistic, doesn't need the most detailed graphics. But it looks good for what it is, and arcade style basketball game.


The new dunks and animations look spectacular and really light up your TV screen. When the players are souring through the air doing backflips well above the backboard, it makes me wish I had a big screen TV.

The sound in game is great! The placement of bits of music is perfect and doesn?t distract you from the game. But just because music isn't constantly playing doesn?t mean its quiet the rest of the time. Between the crowd and the commentator, there is never a dull moment.


Unlike past NBA Jam titles, the commentator has plenty of sayings so you won't get sick of hearing the same things over and over. One of my favorite sayings is from the pre-70's commentator, "he's heating up like an electric blanket".

Suggestions:
They should have made this playable on Live. It would have been so fun! The ability to change the difficulty would be nice too. Other than that, I have no complaints.