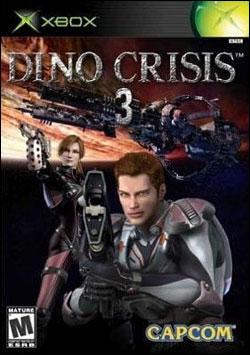 First off I have to state that I have not been a big fan of the Dino Crisis Series. I was willing to give this game a chance because they have always seemed to be popular. This game however holds up to my past experience. I was however really impressed with the graphics right from the start. It contains some really good eye candy and I give a lot of respect to Capcom for the job well done in this department. This impression however would soon be destroyed by the camera angles. These camera angles work for Resident Evil style games but are not a good idea for Dino Crisis 3.

In this game the year is A.D. 2548 and you find yourself in orbit around Jupiter stranded aboard the Ozymadias Colony ship that has been missing for a few hundred years. Upon setting out to board the ship something goes terribly wrong and your transport to this sector the Seyfert probe ship is destroyed. What happened? The supposed empty Ozymadias Colony ship has fired and destroyed the Seyfert. The few that are left from the crew aboard the boarding ship stare in disbelief. Unfortunately they were staring in the wrong direction. The Ozymadias turns the guns and fires on your boarding ship. You get sucked out into space and manage to make your way on board the Ozymadias. Luckily a few more of your shipmates have survived and you?re not alone? for now.

The game plays out with you running from room to room fighting your way through hoards of dinosaurs. Aiming is pretty easy because your character locks onto enemies automatically. You can go into a First Person view and aim at the dinosaurs yourself which may not be worth it. First Person is a nice feature but is killed off because you can't move your character while in this view. This is bad because if you don't dodge and run around from some of the dinosaurs you can be killed with a couple of hits. Plus when you have about 20 little dinosaurs running at you all at once, it gets a little hard to aim at all of them.

Through killing dinosaurs you get credits to buy more ammo, upgrades for your characters stats and more lives for your character. This is a nice feature in the game for upgrading and making your character better. You?ll have to sell your first born child to afford many of these upgrades though. Back to the lives your character has. You start off with 5 lives and trust me you will need them. You can buy more at save points for a high amount of credits. That is if you survive long enough to reach a save point. The save points seem to be few and far between. When finding a save point you may find yourself screaming at the top of your lungs "Finally yes I made it!!", then shortly after walking out of the room dying. Yes, this means almost every time you leave a room and return to it there are more dinosaurs for you to fight.

When trying to move further into the game you have to use your sixth sense to find out where you are supposed to go. The puzzles of this game mostly rely on having to make certain jumps to reach switches that you have to turn on to open a door elsewhere in the ship. This is extremely difficult with the camera angles featured in the game.

Overall the gameplay is mundane and repetitive.

Like I said at the beginning, the graphics really amaze me. This is one of the tops for the eye candy in games for the xbox. The visuals will have you drooling for more.

Now on to the horrible camera angles featured in the game. The camera angles straight from Resident Evil will have you throwing your controller and cursing in languages you didn't even know you could speak. Due to the camera angles, you won?t see the dinosaurs even coming your way. The best way to know if there are dinosaurs in the room is by the change in the music. To me that isn?t a very good warning system. With the camera angles you won?t know if they are running the opposite direction or charging full speed towards you. There is no change in music that can tell me if the dinosaurs are behind me in front of me or anywhere else in the room. The only way you?ll know if you?ve killed the dinosaur is by seeing the eliminate word pop up at the top of the screen. This still doesn?t help much because you?re not sure how many more of them are left.

The view of the map can be a little annoying. Controlling the rotation of the map is a little screwy due to being reversed. Trying to find your current position is only available by switching sectors till it only displays the room you?re in. This gets to be a pain when you are trying to look at the map to find out where to go and have to constantly bring up the map and switch to that sector.

The sound in the game is pretty decent. There are a lot of details in the sounds of objects that are moving, flaming, generating or anything else of the sort in other areas of the room. The annoying sounds of the main character walking got on my nerves pretty quick. There is Chinese water torture and then there is Dino Crisis 3 footstep torture.

During the opening cinematic the voices, although very well animated, sound kind of fake and overdone.

Now I know I was bashing this games flaws allot. I played this game more during the process of writing this review and just found a strange addiction to the game so I will be playing it more in the future. My advice would be getting rid of the Resident Evil style camera angles. If the camera had been better this game would have been so much better. I've read many opinions of other people that have played the game, and everywhere you go you hear cries about the camera.