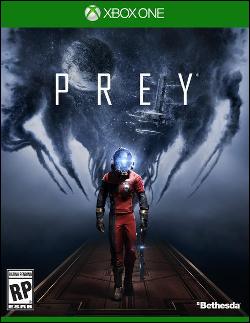 Set the way back machine to 2006 and you'll come across an Xbox 360 game called Prey. It took its audience on a wild, psychological roller coaster ride, but it's execution resulted in a mixed reaction from the community, and for the longest time we heard whispers of a new Prey game in the works. As you can imagine, being over a decade since its initial offering there were many changes that took place over the course of the years, until now."

read more
Prey: Typhon Hunter to Arrive December 11 With Multiplayer Mode
The last update for Prey is set to hit in a couple of days, and we have the details for you.
Check out Prey via a 'Trial' Starting Today
It seems that there are a few people who may not have checked out Bethesda’s game Prey. Well now there is a free trial for you to check out if you have not played it.
Original Prey Soundtrack Now Available
For fans of the upcoming game, you can now check out what the music will be in the full game, as Bethesda releases the full soundtrack for your listening pleasure.
Reminder - Free Prey Demo Available Now
Looking to check out or get a head start on Bethesda’s Prey? Well, there’s a free demo of the first 1 hour of the game that you can check out now.
Video - Prey: Recycle Everything
Check out Bethesda’s tribute to recycling and everything that meant "Earth Day" from this past weekend.
Video - The Weapons, Gadgets and Gear of Prey
Check out the latest trailer highlighting much of what you will be using as you vanquish enemies in Bethesda’s upcoming game Prey
Video - Prey - Playing with Powers
Bethesda releases a new Prey video that has some insight into your in-game powers and what some of the dev-team has to say about them.
Video - Bethesda's Prey - ‘Only Yu Can Save the World’
Check out the latest video for the upcoming game Prey. It may just explain a few things to you in preparation for the game’s release this year.
New Video for Prey Released
Feel free to click on through to check out the newest video for Bethesda’s Prey, it may just peak your interest.
Prey Finally Gets a Release Date
Looks like May will be a good month for fans of Bethesda’s upcoming Prey game, as they officially announced the launch date.
Prey Unveiled. Being Developed by Arkane Studios
In an unforeseen surprise, Arkane Studios is not only rebooting Prey, but re-imagining the franchise from the ground up. This reveal trailer looks awesome!

Xbox one no signal
Post by debrartin
0 Replies, 48386 Views