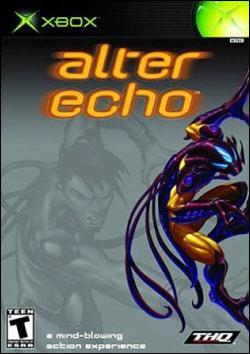 In "Alter Echo" players assume the role of Nevin, sent on a mission he does not yet understand to a planet whose very surface is alive. Interstellar corporations mine the planet's organic skin -- a substance called Plast -- and use it to make bio-machines. Nevin is one of the rare "Shapers" who can psychically alter Plast -- and time itself. Nevin discovers that illegal experiments have infected Plast with human consciousness, and now he must fight for survival against a world gone mad, an entire planet that is using its bio-mechanical properties to spawn enemy after enemy to destroy him. An advanced real-time skeletal morphing system lets players to change between Melee, Gun and Stealth modes on the fly and during combat. The Outrage-developed TimeDilation system allows players to freeze the action and cue up an unstoppable flurry of moves and special attacks. The groundbreaking PostFX camera system intensifies every action with mind-blowing visual effects, camera filters, and screen distortions.
Score: 60
Overall User Average: 6.00 / 10 (60.0%)
Gameplay User Average: 7.00 / 10
Graphics User Average: 6.00 / 10
Sound User Average: 5.00 / 10

Overall: Probably a weekend rental. It didn't take long for me to clear this game, and for those of you who enjoy having a quick pick-up game of kill everything, a steal for eight to ten dollars.
Gameplay: Here's where the game does shine at times. The ability to instantly morph into one of three forms allows for a lot of cool customization of battle combos. For instance, juggling your enemy into the air in sword form, then morphing into Gun form with the Seeker bullets and rapidly firing is kind of neat. Thankfully, enemies adapt to your patterns, so you dont get bored using the same moves over and over again. The combat system alone is what, for me, brings this game to its shiniest peak.
The Sync nodes and time dilation, however, are where this game falls flat on its face. An annoying minigame wherein you have to time d-pad presses in order to connect the dots, essentially, it serves only to frustrate the player and distract them from what could have been a really good spot for a mini boss or something of the like.

Graphics: The game presents you with a nice sci-fi feeling from the get go, from Nevin's cool looking Echoplast suit to the unique enemies that are thrown at you. This feeling of graphical awe lasts about ten minutes, which is my personal recommended game time for one sitting. After more than that, you begin to notice the collision errors (read; in Stealth form, Nevin's head can go through walls), the lack of any real variety in the drones, and the down-right plainness of the backgrounds. The environments, while incorporating cool form-specific elements, are still lackluster half-way through the game.

Sound: I have come to expect better music and sound effects from this console. While I'm not entirely aware of how old this game is, I can say with confidence that there are plenty of games with better sound quality and voice acting (though, this surely wasn't any 'Don't open that door!')

Xbox one no signal
Post by debrartin
0 Replies, 106685 Views