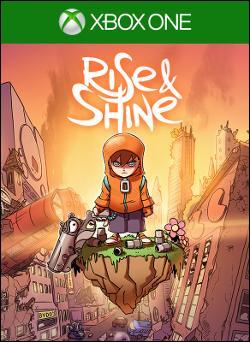 On the distant planet of GameEarth, a war is brewing between its peaceful inhabitants and the heinous, warmonging space grunts who wish to do them harm. In the middle of this battle is a gun, nicknamed Shine, which falls into the hands of a ten year-old boy named Rise, who immediately becomes its carrier, protector and ally. Such is the premise of Rise & Shine, the aptly titled debut project from the talented folks who make up Super Awesome Hyper Dimensional Mega Team."

read more
New Launch Trailer for Rise & Shine
Fans of Adult Swim Games can check out a new trailer for Rise & Shine, their next game that releases January 13th.
Rise & Shine is Available for Pre-Order
Adult Swims Games next title is ready for pre-order as we speak....errrrr, type.
Rise & Shine for the Xbox One to Launch on January 13
Looking for a game that combines bullet hell shooters with puzzle platformers. Well then this game from Adult Swim Games might be up your alley.

Xbox one no signal
Post by debrartin
0 Replies, 48316 Views