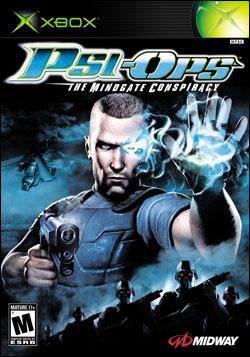 When I first heard about Psi-Ops I was skeptical. Midway had been on a decline as far as game quality goes as of lately. However Psi-Ops was a very big surprise to me."

read more
Psi-Ops: The Mindgate Conspiracy is set in a near-future environment dominated by technology and order. The action-packed gameplay is an amalgam of Psi powers and weapons combat. Players take on the role of Nick Scryer, an elite American Psi-Operative soldier who must combat The Movement, a fierce terrorist organization set to overthrow world order. Scryer must fight a deadly horde of brainwashed super soldiers by using his Psionic powers including - Telekinesis (lift and throw people and items using mental powers), Pyrokinesis (throw walls of fire), Mind Control (take control of another character’s body.)
At the main menu screen highlight "Extra Content" and press R. This will bring up a Password Entry screen. 978945: Unlock all Psi Powers

Overall: Psi Ops would be a standard 3rd person shooter with so-so graphics and semi bland environments, if it were not for the inclusion of the Psi-Powers. You are given the ability to do some pretty nifty things with his brain powers. You can pick up objects or people and toss them around at will. Or, you can gain control of another character and use the bad guy to kill other bad guys. You can have an outer-body experience and walk through doors to see what's beyond without getting hurt. All of these things set the game apart from your standard 3rd person shooter, and make it a joy to play.
Gameplay: Psi-Ops controls very well. Using your Psi powers is very intuitive and not hard. Having the powers affords you about serveral ways to solve any situation, and millions of ways to kill the baddies. For example, you can pick the bad guy up and thrash him against the walls repeatedly until he dies. Or, you can hold him in the air and shoot him. Or, you can slowly throw him into an open fire. Or, sneak up behind him and suck out his Psi energy until his head explode. Or, just shoot him. Or, take control of his "friend" and introduce him to some friendly fire. Or, take control of him and make him jump into a lake or a tall building. Well, you get the picture... The level designs are fairly straight forward with a few puzzle solving type problems. There are boss battles, but they are handled fairly well and each are very different. Overall, there's not much to complain about in the gameplay departmnet. It's the visuals where all the problems are, which leads me to the next category...
Graphics: Yuck. Psi-Ops is not easy on the eyes. The environments are bland and stereo typical of these action games (shipping yard, train yard, futuristic prison with endless metal hallways, office building). The character models look dated and are not very fleshed out. Just a whole feeling of 'blah' surrounds the visual portion of the game.
Sound: The voice acting is a mixed bag. There's a female in the game that sounds a little too mannish. The rest of the voice acting sounds pretty B movie-ish. The sound effects are serviceable, and the music is not really noticeable, which can be good or bad.
Suggestions: Terrific gameplay in the body of an ugly game. Upgrade the visuals. A little more creativity in the environments.

Overall: The concept of this game is great. Usually we just have a gun to go in and blow people away. This game takes it to another level though. You have Psi-Powers! And that's just cool. It can take a bit to learn the control, but when you get good at it, it's nothing but awesome.

That being said, don't buy this game. The begining of the game is great, shooting guns, throwing random objects at bad guys, controlling peoples minds, even setting them on fire. So cool, but horribly, it's like two companies made this game. The begining is great, the gameplay for the end, is like another company completely! Just bad, bad, bad! I hated the end, It's an entirely different game, and not a good one.
Gameplay: I covered this above. It starts out great. Picture 2 enemies running into a room. Shoot them? NO! Pick up one of them, throw him into the other guy, then set them both on fire and listen to them scream. So cool! If only the game kept this formula it would be a winner.
Graphics: Nothing wrong with the graphics. The actual gameplay was great, and the sut scenes were beautiful. The blonde chick that helps you along the way has one of the most beautiful faces on a NPC. Usually companies just give the girls a HUGE rack and call it graphics, this girl was great.
Sound: No issue with the sound. It didn't particularly stand out. Nor did it bother me. It's all good to me.
Suggestions: Next time lose the aura sight. As soon as I got that power I knew the game was taking a bad turn!

In this sequel to 2017 cult hit Serial Cleaner, it’s your job to eliminate the evidence left behind by the ruthless mob in ‘90s New York City, as you play as four anti-heroes.

Now including a co-op multiplayer for up to four players, the largest fleet of vehicles in the history of the series and numerous new and once again significantly expanded features in a completely revised, modern look for the series.

Warpips is a streamlined strategy war game that will have you deploying battle units in real-time against AI-controlled opponents. Each level follows a tug-of-war structure where the objective is to reach and destroy the enemy’s base.

Unholy follows the disappearance of a young child from a run down, unwelcoming post-soviet town. Using exploration, puzzle solving and innovative combat mechanics, players will traverse between reality and a twisted Unholy world.

Play as the adorable feline hero, Gori, on a death-dealing hoverboard to save the cuddly crew from certain cat-astrophe.