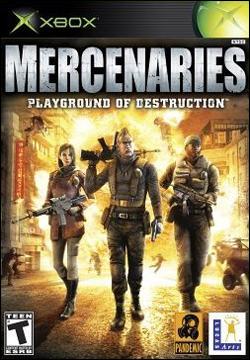 Overall: Love the open ended gameplay. Black market website is cool, and actually a lot of fun hunting down each person in the deck. Tons of bonus missions, some transportation, others "travel with this vehicle to this point in under to get
Gameplay: Black market website is awesome. Basically, as you progress through the game, you can buy munition drops along with vehicles, The more missions you accompish, the more vehicles and supplies you can buy, c4 drops being something you'll order a lot. You can hijack a vehicle of one faction, go destroy something in it, and make it seem like they fronted the attack. Many missions will have you doing this too. The deck of 52 is great, I just love killing the little peons who are so poorly guarded, many of'em are easy to find if you look at your intel, or if you fly around a lot, they pop up on radar if your anywhere near them so that's a fairly easy way of finding them. The face cards generally have better protection and even SAM-sites to blast your !&%$@#* out of the sky and rockets on the ground. It's pretty crazy. There's an auto-target thing for weapons on foot while tanks and turrets require manual aim. Overall, the game plays great, and every destructive thing you concoct is very satisfying.
Graphics: The characters models, cars, and environments aren't incredibly detailed, but nonetheless they are good. The particle effects are where the game shines. Explosions of cars and falling of building are wicked awesome, if you got enough dough to blow, you'll just buy C4 to knock down buildings. You can even put'em on a car, jump out, and detonate, just like in the BF:MC demo. Pretty good looking game considering all the stuff you can do.
Sound: Simply amazing. The music is excellent, the voice acting is superb, all the sound effects are just ridiculously awesome, from the guns to the explosions. It's really hard to describe, but definetely quite a treat for audiophiles.
Suggestions: Sequel with bigger booms and lots more stuff to do.

Overall: Game overall is fun. Great graphics, great gameplay and so fourth. I just like that you can drive and fly a ton of "crap" and steal shoot and destroy the "crap out of it." It is also an open end game so enjoy that part where you can go wherever you'd like. Also with the money you earn during the games you can call in airstrikes and so fourth which can come in handy, and is always cool.
Gameplay: If you can reach it, you can drive it or fly it. I like how they put that. It's great to know what you can do in this game. Who wouldn't like 'blowing the crap' out of stuff? Or driving or flying things? This game does a good job with it. Multiplayer would of made this game even better however.
Graphics: Graphics are nice. It's a good strong point. I'm sick of some games that have too many errors in the game, or the surrounding are just plan out stinks. They did a great job covering things.
Sound: Guns firing, motors running, people talking, stuff blowing up. It's all great. They really did a great job putting everything together nicely.
Suggestions: Make another one, I enjoyed the first. So, why not make a sequel? Multiplayer would be awesome.

Overall: A very fun game, almost perfect...I think maybe making certain missions doable in various ways, more stealth, attack, hit and run, etc...yet the mission variety is pretty good. While this game won't out GTA any GTA games, blowing stuff up for profit w/o having to run from the cops is great fun, the difficulty ups quickly though.
Gameplay: The controls are solid, the vehicles (driving and flying) all handle realistically and very well. The choices you having of favoring one faction over another, or spending money to remake friends, call in airstrikes, vehicle delivery...makes you feel like GTA in a combat theatre of the Gulf War mixed with the Korean War, here again very fun.
Graphics: Colorful explosions, very detailed character, weapon, vehicle and environment deisgn...while some things may seem muted, it's a war zone, of course thingsare gonna look drab and run down. Well done here again.
Sound: The military chatter, authentic languages (Chinese, Russian and Korean), good voice acting, weapons fire, vehicle sounds, radar and missle lock sounds, PA's in disputed cities, all great and of course coming from Lucasarts, good sweeping musical scores.
Suggestions: Lucasarts has got a great one here, maybe a few things different like a deeper briefing with maps and approaches and availabe support briefings before a mission, help with strategy and allow one to better pick stealth, out right attack, some of both, but still a great one...make a Merc 2 for Xbox 2.

Overall: This game is really fun, the levels are huge!!! There are 5 different armies you can be friends with, Allies, Russian Mafia, North Korean, China and something else i forget
Gameplay: hijacking vechicles is fun, kicking people in the balls is fun, blowing up anyone and anything, this is a great game if u like destruction
Graphics: the driving looks great, the running, the jumping, the blood, splatters from wherever you shoot them
Sound: the guns sound good, the vechicles engines sound good, the Chinese sound really Chinese, the Koreans sound Korean
Suggestions: Make Mercenaries 2 online, if there is a Mercenaries 2

You control one of three mercenaries (each has their own benefits) in a political hotbed. Rival factions (UN, South Korea, China, Russian Mafia) vie for power and you profit by accepting their contracts, accomplishing challenges, destroying enemy (North Korea) equipment and, most importantly, collecting bounties on the 52 most wanted (based on suits of cards) "Deck of 52."

As you mass more and more money you can buy weapons, equipment and "services" (surgical air strikes, artillery support, etc.). You get charged for "collateral damage" as well as using medical services (you're not bulletproof, Rambo!).

Flexibility to move through huge maps and interract with personnel and equipment make for an exciting and entertaining game that can be a few hours of mindless fun or serious "call in sick & stock up on mountain dew" game fest.
Gameplay: If you can see it, it can be picked up, shot at, blown up, moved, "borrowed with the intent to own" etc. As the advertisement says: "Blow stuff up... blow it up again... blow the SNOT out of it!"

The effects (physics, ballistics, weather, particle, ragdoll, etc.) of this game are truly raising the bar for new games to come.

The UI is quite easy to adapt to - ranging from running around the battlefield, driving a wheeled vehicle or helicopter, using special equipment, etc.

A very simple HUD/crosshair system makes for an easy shooter - it only gets hairy when it gets HAIRY - as in being shot at from multiple directions while trying to evade fire to get to some cover.

Powerups are few and far between... make friends with the Russian Mafia quickly and you open channels to resupply through their covert store "Merchents of Mayhem" - you can buy cool stuff and as you progress, you unlock more and more cool stuff... how about driving around the battlefield in a HUmmer H2? :-)

Game saves cannot occur during "contracts" but you can save any other time... you can spend as much (or as little) time between contracts as you care to. Take some time to stop and smell the roses - then blow them up!

Your character only dies when you require medevac and don't have the money to pay for the services (hasn't happened to me yet!).

This isn't DOOM where you can run around with an arsenal, either - choose your weapons wisely - you get 2 firearm types (I like a MG and an RPG), 2 grenade types (frag and flash/bang), C4 (did I say BLOW STUFF UP yet?), Hi-tech PDA (no MP3 player) and binoculars (gotta see what you plan to blow up, right?) - additional firearms are available from your local, friendly black market merchant, and more become available as you unlock them in the game.
Graphics: Good graphics - effects and sprites are awesome! Animation is smooth and the game unfolds very nicely.

The bumpmaps on buildings are a bit drab, but it is North Korea... I guess it shouldn't look like the inside of a Las Vegas casino!
Sound: Sound is good and dimensional - you will be shouted at in several different languages - and the voice acting is spot on.

Prepare for sensory overload and you will suffer a little "fog of war" during tense firefights.

The musical score and ambient sounds are quality as well.
Suggestions: Multiplayer coop or H2H would be fun.. as would an XBL option - perhaps in Merc2.

Great job - the game is lots of fun and an excellent addition to any gamer's library.

Xbox one no signal
Post by debrartin
0 Replies, 117981 Views