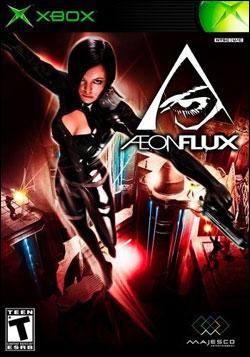 This is a really fun game to play! The game takes place in the not so distant and twisted future and in the 400 years before the movie timeline starts. So in this way I guess it would be regarded as a prequel."

read more
Developed by Terminal Reality, creators of Majesco’s hit BloodRayne series, Aeon Flux is based on Peter Chung’s popular futuristic MTV animated series and features a palpitating blend of stealth, speed and acrobatic combat. As beautiful as she is lethal, Aeon Flux is an agent whose abilities transcend everyday belief; she will depend upon those skills and talents to rid the city of Bregna from an evil tyranny.
Score: 85
Overall User Average: 9.00 / 10 (85.0%)
Gameplay User Average: 7.00 / 10
Graphics User Average: 8.00 / 10
Sound User Average: 9.00 / 10

Overall: an amazingly well lograted game, with only one problem, the control, it is a little confusing and unprecisly but this game realy rocks, it is like a mixture between, tomb raider, perfect dark and splinter cell, definitly a game thet should be in your xbox or ps2 game collection, of course the best adaptation is for the xbox it is an amazing adaptation on the movie based on the series by peter chung, if you had never seen this, it may be a little excentric, but really it has an amazing interfas an it stays loyal to the series.
Gameplay: this is the biggest problem, an amazing story and levels but a poor control. Really holds back the game... could have been really amazing.
Graphics: very good graphics, sometimes it looks like a new generation game, but sometimes they are a little ugly.
Sound: amazing music and voices, but some times they talk like politicians, as in they are annoying. haha.