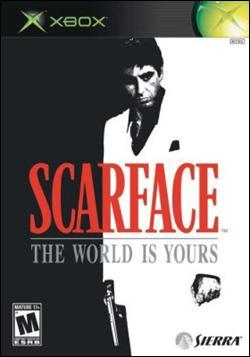 The World is Yours! Scarface, the epic film that transcends generations and appeals to contemporary and urban audiences alike is now coming for the first time to game consoles worldwide. In a complex world filled with excess and greed, players can take the role of Tony Montana, one of the most ruthless gangsters ever depicted on film. Highly acclaimed feature screenwriter, David McKenna, has written an original event-driven storyline that leads the player through a sordid and violent underworld.
Score: 80
Overall User Average: 8.00 / 10 (80.0%)
Gameplay User Average: 9.00 / 10
Graphics User Average: 8.00 / 10
Sound User Average: 9.00 / 10

Overall: This is a fun game based on the movie Scarface. It starts out where the movie ends and instead of getting shot and dieing like what happens in the movie, you survive the attack in Tony's mansion and you go on to rebuild your empire from scratch. You gain territories to add on to your empire by taking out gangs.
Gameplay: If you like shoot em ups you will probably like this one. It is alot like Grand Theft Auto but you can sell drugs too. The most fun part of the game is the beggining, it is very intense, but after that it can get just a little boring. Some of the cool features include driving boats and manual targeting, which allows you to aim at a spot on an enemie, shoot, and it will tell you where you shot them, like "left arm", "right kidney", "groin"' "left nut". When the police stop you, you can also fast talk them and you won't get busted. One other cool thing in the game is rage mode. When your rage meter is full you can start it and everything will go black and white, you cant get hurt, and you can just blow people away for like 10 seconds, while Tony yells and curses. Every action part of the game is very fun but once you are past the beggining it is hard to find action, all you do is go around and sell drugs, and look for gangs to take on, and it is hard to find them after you have been playing the game for a while. If the whole game was as fun as the beggining I would give it a 5 overall and a 5 for gameplay.
Graphics: The visuals are good for the xbox but not fantastic, I don't really have anything else to say about them except for they are just good.
Sound: Sound is great! It makes the game so much more intense in gunfights, you can here everybody yelling and screaming and cursing, and the sounds of the weapons are great too.
Suggestions: If you ever make a second one it would be nice to have multiplayer co-op.