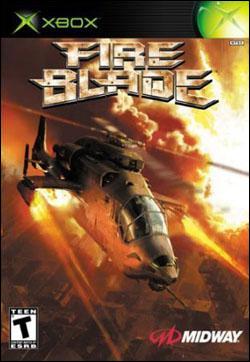 In the cockpit of FireBlade, there is one goal: use whatever means available to annihilate the terrorist cells flaming up around the globe. Battle through 18 missions in four campaigns at the helm of the Carrier chopper or the Vendetta attack copter and unleash a barrage of deadly, hi-tech weapons including Swarm Missiles, Sniper Cannons, and Laser Guided Homing Missiles. Go turbo, or remain undetected from enemies in stealth mode. To win the war, you've got to end the war. Attack and destroy!
Score: 65
Overall User Average: 6.50 / 10 (65.0%)
Gameplay User Average: 6.50 / 10
Graphics User Average: 7.50 / 10
Sound User Average: 6.00 / 10

Overall: It's an awesome sim game, totally killer graphics, especially the water. 3rd person effects, cool weapons, challenging, just lots of fun.
Gameplay: very good, graphics are important to me, and this game has great graphics, not the best I've seen, but great. gameplay appeal is just above averaqge I'd say, with lots of tricks to learn.
Graphics: Like I said, excellant graphics, especially the water scenes. In this game you're travelling above the water alot, and they did a great job in that area of the graphics, I'd even have to say that the water scenes in this game are the best water scenes I've seen yet.
Sound: Average sound, the chopper is good, the weapons sound is good, the explosions, overall the sound graphics and appeal all blend in nicely.
Suggestions: common people, create a site where i can get some tips and clues for this game, I'm stuck at the end of the first campaign!

Overall: This game seems to be selling far below the normal $50 price for an xbox game. The low price point makes it attractive. It also has no competition as far as other chopper sims. There is a real DVD do !&%$@#* entary included to get you pumped up.
Gameplay: More arcade than sim, there are several weapons and even stealth mode.
Graphics: The graphics are not flashy or impressive. This looks like your average port job.
Sound: Souns effects could have been more interesting.