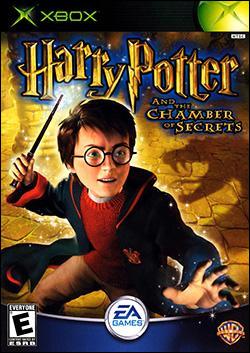 Be Harry Potter in a new adventure with more magic, friendship and danger. Learn new spells, undertake new quests, make new friends and challenge new adversaries to confront the powers at the heart of the Chamber of Secrets. Do you dare take the chance that you might face You-Know-Who again?
Score: 76
Overall User Average: 7.60 / 10 (76.0%)
Gameplay User Average: 7.60 / 10
Graphics User Average: 9.00 / 10
Sound User Average: 8.40 / 10

Overall: I am a huge Harry Potter fan outside the gaming world. I am very much anticipating the arrival of book 5. I have enjoyed both movies, and when I first began to play this game I was very happy to have something to play on the xbox with my neice. I hate this game. mostly because I can not pass the stupid avifor spell test. The camera view ruins this game. I will not buy another EA game because of this disasterous game.
Gameplay: Very,very,very,very fustrating. The controls and the way you view something is reverse than the way I am used to and they don't have a simple control adjustment. Too much writen on this piece of junk game
Graphics: Visually it is beautiful, what I would expect. Nothing wrong with the visuals, except that I can not tell you what the majority of the game looks like, because I can't jump across one gap.
Sound: What I would Expect. I am sorry but i have nightmares with the sounds of the stupid ghosts in the room in which I can't jump across the gap.
Suggestions: Put some thought and effort into your game development you a-holes.

Overall: Wow man this game was so good! First of all, I loved this movie so much. I also loved the book. So let's review our math, shall we? Great book+Great movie= Amazing game. This game was nearly flawless, and while I understand the one guy's complaint about the gaps, I beat that and the game was so good that it made me stop and wonder how they could actually make it so Harry Potter-like.
Gameplay: There was not one aspect of this game that I did not like. The gameplay was very, very, very good. What else is there to say? Buy this game if you are a Harry Potter fan and your parents allow you.
Graphics: Flawless. The graphics were on the entire game. The quidditch game was so nice. This game was magnificent. So were the visuals.
Sound: The sound in this game made me really get into it. It had the "dramatic" sounds which related to the game and where you were in the game, so I would say very good sounds.
Suggestions: Make it multiplayer, so that you can play as Harry or as Harry's friends. I also think that it would be a very good idea to make the entire castle able to walk through. With that being said, GREAT JOB WITH THE GAME!

Overall: This game is too easy. I beat it in under one day, and my 7 year old cousin did so in a few more hours then me. I believe that the gameplay is great, so is sound, but it is very very short game.
Gameplay: Its great fun. You get to fly around on broomsticks, play in quidditch matches, use spells, and the controls are pretty good. Overall, great gameplay.
Graphics: God, slick visuals. They could improve in this area though. Some of the characters look nothing like they did in the movie. Also, some of the monsters in the game looked very strange, and not in a good way. They could definitely improve graphics.
Sound: So, So sound. Not the greatest, and hardly any music. The one thing that is great is that the characters were voiced by the people from the movies.
Suggestions: Make it longer, and give it a higher replay value. This makes me want to !&%$@#* my pants...

Overall: Nice little game. Really gives you that warm, fuzzy feeling that the books give you. Great game for kids who are fans of Harry Potter movies and books. My kids from 5 to 13 love it.
Gameplay: The controls are easy to learn. Even though there are many things to do, it is easy to figure out. My five year old had no problem learning them. The whomping willow is insane.
Graphics: Graphics are great. The people could look a little more realistic when talking to you though and Ginny Weasley's hair looks like a helmet (rather than hair).
Sound: Great voices and sounds. Just wish they could have gotten Kenneth Branaugh (the actor who played Lockhart in the movie) to do the voiceover for Lockhart in the game.
Suggestions: More explorable places in the next game.