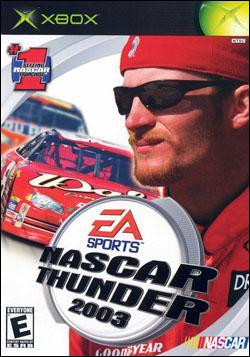 read more
Feel the intensity and passion of being a NASCAR driver on a quest to become Winston Cup Series champion. Jump behind the wheel of your favorite car and take on real-life scenarios as you battle 43 of NASCAR's biggest stars. Complete with dramatic pileups, walls of smoke, and constant door-to-door, three-wide racing, no other game tests your nerves and your racing skills this much. Build a racing legacy over the course of 20 drama-filled seasons and strive to become the greatest driver in NASCAR history. An all-all new game engine delivers better gameplay through improved physics, A.I., and control. Graphics rendering technology delivers spectacular new car and track highlights, enhanced smoke and damage, and even more dynamic racing venues. You're in the driver's seat now.
Dale Earnhardt Sr.: Go to Create-a-car. Type first name as Dale. Then last name as Earnhardt. You don't have to save the car. You get the license plate.

Overall: In a single word: &quo. I love stock car racing, and I've played alot of racing games on the PC and on console. This one is not a good one. Given the hardware that the developers have to work with, this game is very mediocre. Subpar if you compare it with other racing titles available for XBox.
Gameplay: This game attempts to capture the thrill of stock car racing, but fails in the most simple ways. The AI cars are perfect drivers, and thus are very predictable. Playing this game with joystick is impossible, and playing with wheel is not much better. Modifying the car setup doesn't seem to have much of an effect. Jeez, I could go on an on
Graphics: Graphics are bad. The old Nascar 2 game for the PC has better graphics than this game. I don't know why, but it is way too cartoonish for me.
Sound: Hmmm...I'm not even goind to comment. I don't have anything nice to say here either. Some of the tracks are kind of nice.

Overall: Fast cars, realistic driving effects and damage. Add your own music to this thrilling game. Features season and career mode. Ever wanted to hire and manage a pit crew? Now you can. Career mode is extremely detailed and will immerse you into this fun and challanging game.
Gameplay: The cars look great and there is a lot of depth to the game with lots of customizable options. The season mode is deep and the career mode takes you even deeper. Even on "Rookie" the game is challanging.
Graphics: The cars look very realistic, but the background effects (crowd, railing, etc). is not as stunning. The car detail and light effects work well.
Sound: Your pit crew gives you details about positions of other cars and information about your tires, fuel consumption, etc. Rip your own tunes and listen to them while you race. Perfect.
Suggestions: Ever hear of Xbox Live? Step up to the plate EA.

Overall: Just like every other racing game but there was alot more tracks and options hey ya gotta givem that
Gameplay: if you like racing games and you like to play all the time this game will float your boat if you don't get into a game if you suck at it then it will SINK you boat
Graphics: Graphics are alot better then the first one but could still use alittle work when it comes to graphics BRING ON THE HEAT
Sound: i like burning out and all that fun stuff (Music was ok) more then just SWEET HomE alabma :-) all and all it sould quality was nice

Overall: VERY REALISTIC!!! I didnt give up on this game until I am good at it. Right now I am driving like a pro. Richard Petty stated this game is good for driving training. So I set the settings (Assist) Stablity control (off) and Auto brake (off). I am glad I am driving like a pro!! Once you are good at it you will be addict to it!! No wonder NASCAR drivers wouldnt retire early age!!
Gameplay: Like I said the control in pro level is the best one and challege. My friends didnt give up and they are not into pro level. They wanted to be in so they can whup my azz. They never did. Heh Heh. I tried NASCAR Thunder 2003 on PS2 with friends and we realized xbox controller is the best design for racing than PS2 controllers.
Graphics: AWESOME Graphics. but the graphic of damages in Thunder 2002 is better. This 2003 game the cars flip like a cardboard box!! Dont make it look stupider in 2004 please!!
Sound: I am deaf and doesnt care about the sounds. I like the vibrations it helps alot. I would say its all very good.
Suggestions: Online and no more flipping like a cardboard!! It would be nice to add the creations in different body skin colors for those all different skin color gamers out there. One of my friend is black and he created his car and when He won and went into the victory lane and he felt funny that the driver is white. He doesnt feel like its him at all. Please be kind to put that in 2004.

Overall: Beautiful graphics, smooth gameplay, soundtrack support, and the ability to unlock #3 Dale Earnhardt. I am a big fan of Heat 2002 over Thunder 2003. The gameplay on Heat was just so much better. That has now changed with Thunder 2003. EASports has finally stepped up to the NASCAR palte.
Gameplay: Much better than Thunder 2002. Nice additions such as soundtrack support and better control/stability. Drafting is awesome. Thunder 2003 added a feature that allows you to see who is behind you and exactly where they are on the track. This feature is essential for blocking. Multiplayer, Lightning Challenges, and Thunder Plates make this a game with awesome replay value.
Graphics: Graphics are awesone. Jets fly in the background. Smoke and glare from the sun hinders your driving at times (just like the real thing). The cars look awesome and most come with additional "skins&
quot;.

Sound: Thunder 2002 was lacking in the sound department. Thunder 2003 has resolved that problem. Engine sound is awesome and with Dolby 5.1 you can hear the cars and crashed all aound. You can also rock out to your own tunes while racing at over 200 mph.
Suggestions: Additional "views" would be nice for the full racing experience. I loved the "frame" view of Heat 2002. Awesome game.

Overall: I have never really been much of a Nascar fan but I love the games...this game is by far one of the best. When you start off in career mode your car sucks and you have to work your way up which makes the game a lot more interesting.
Gameplay: Who doesn't love a good racing game? But with the career mode, the replay value is golden. This game is an absolute blast.
Graphics: The crashes look incredibly real. The parties after you win a race and the ability to do donuts after a win is awsome.
Sound: The engines roaring...the cars crashing...you can't beat Nascar!! I also love the music. The ability to play your own music makes this game even that much better.

Overall: The best Nascar game i've played for sure.Alot of extras to keep you busy for months,like the career mode.
Gameplay: the best,the A.I is very hard to beat even on rookie,but i wanted it to be hard anyway.If your a fan of Nascar you will love this game.
Graphics: the only problem was on some tracks it gets a little fuzzy in the distance right where your looking when racing,but everything else was well done,the shadow and light effects add alot to making this game look great.
Sound: the sound is also great,you can hear the other cars sneaking up on your six when they try to pass.The cars sound powerfull like they should.
Suggestions: alittle more work on smoothing out the grafix in some of the tracks,other than that, great job!

Overall: I liked it, but not too much, the gameplay was repeditive, but overall it was fun.. Its worth buying, but not one of the greatest games

Overall: After just reading about this title in "Game Informer" Magazine I was surprised to see it on the shelf at my local Wal-Mart. Being a NASCAR fan I gladly laid the 50 dollars on the counter and headed home to try it out: GREAT graphics, sound, physics, and a seemingly brand new game engine, plus the addition of Lighting Challenges make this game a must have, and not just for NASCAR fans.
Gameplay: The game comes with a fairly high learning curve, you will have to do quite a few laps before you feel really comfortable with the car and the right racing lines. Create-A-Car is back this year with a lot more options. More tracks and drivers also give the user something to work toward.
Graphics: Nothing else to say but WOW.
Sound: Sounds like a 3600 pound 700 horsepower stock-car to me. Plus with soundtrack support, can't beat it.
Suggestions: None.