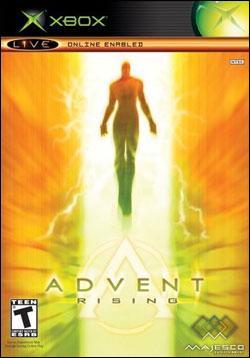 This is the perfect example of story driven games that rely too heavily on the story. Critically acclaimed author Orson Scott Card (Enders Game), co-wrote the dialogue for this title, Advent Rising. The story is massive."

read more
In Advent Rising, a common legend pervades the galaxy - that of a powerful, ancient race that will one day unite the universe. Millions of cultures from vastly distant worlds revere and hallow these mythological beings known as humans. One race, the Seekers, know humans actually exist and are threatened by their potential power. Under the guise of benevolent explorers, the Seekers travel throughout the galaxy in a desperate attempt to eradicate any human society they unearth. Players assume the role of Gideon Wyeth, a remnant of the last human outpost, on the brink of discovering the incredible powers that lay dormant within him. It is these powers the Seekers are so desperate to suppress.
Score: 83
Overall User Average: 8.50 / 10 (82.7%)
Gameplay User Average: 7.50 / 10
Graphics User Average: 7.50 / 10
Sound User Average: 8.00 / 10

Overall: All in all, I would give Advent Rising a 4/5. It's a nice, unique presentation that the developers give you, but frame rate problems and a few minor problems might turn some people off to it. Though the game isn't as long as some people, including myself, would like it to be, it is still an average length for its genre. The movie-style presentation, average graphics, superb music, fluid controls, character(strength-wise) development, and various other unique tidbits will make this game remembered. However, the frame rate problems, minor flaws, length, and main character may turn some off. If you're worried about your hard earned money going to waste, rent this game at a local rental shop or from GameFly. If, like me, you've been anticipating the game for a while and will be happy with what it does do well, then go out and purchase it. It's something both the casual and hardcore gamers should like and any patient action fan should enjoy, but it is a hate it or love it type of game. I, obviously, unbiasly love it for what it is, but play it yourself before jumping to conclusions about it.

Gameplay: Ahh, the most important part of any game. First off, the controls of the game have been well done. The flick targeting system ranges from alright to downright annoying at times and is sort of hard to adjust to at first. Luckily, there's a kind of auto-targeting that occurs when you fire and aren't locked on to anything, so if you can't pick up and get a hang on the controls at first, you'll be fine. But, sometimes the game will automatically lock on to enemies and you'll have to hold down the right joystick to stay locked off of them. It's kind of annoying, until you realize holding down the joystick keeps the target free. The rest of the controls are easy to get used to and are decently done. Even though some buttons are used for different things (for instance, Y is used to pick up a right-hand weapon and to reload), the two rarely clash. The only time they do is when you're trying to pick up a weapon for your left hand. Since X is both Dodge and the button to pick up the left hand weapon, if you don't completely stop, your character will dodge instead of picking up the weapon. It only takes a second to stop and pick up the weapon, so unless you're at the very end of your life, you won't be harmed much from doing this. And finally, the vehicle controls are done averagely. The vehicles and how you drive them are just like in Halo; you move the camera to help you steer where you want to go, along with moving the stick, and the right trigger hits the boost for the vehicle. It's not perfect and it's not horrible.

Graphics: As for the graphics, they aren't anything too spectacular or unique. They're on par with most 2005 Xbox games, if not a little worse. The stages are nicely done and are, later on, special. In the beginning, though, they're your normal "in a space ship" stages. And, for the characters, they're definitely different. The humans aren't really unique. The main characters look very generic, the people in normal battle armor are also kind of generic, and then there's some type of elites that remind me of something out of Ghost in the Shell. The aliens, on the other hand, are mostly nice and unique. There are a few plain ones, but, for the most part, they're all pretty unique and badass looking.


Sound: If you appreciate classical music or enjoy the type that plays during the game, I do believe you'll have an eargasm. It goes well with the story; it's nothing like Devil May Cry's, respectively, because they're two different types of stories - one about desperation and hope (Advent Rising), and one about, simply, revenge and killing (Devil May Cry). And, surprisingly enough, it was all done by Tommy Tallarico - yes, the often hated short man that co-hosts G4's Judgment Day. Another part of the audio, the voice acting, is done alright. It's not perfect and it's not terrible. Thankfully, Gideon doesn't have any one-liners he repeats countless times when he kills enemies, but his voice or his(and his brother's, for that matter) attitude may turn some off and some on to him. But, there are some other voices you should recognize, too! For instance, the voice actor who did the voices of such characters as Spike from Cowboy Bebop? is in the game as the voice of random NPC's. It just goes to show that they at least tried to make the audio well, and it didn't come out half bad, if you ask me. And, on top of this, the mouths even move with the lips, but not perfectly. It's just a nice little thing I picked up on that's noticeable.

Majesco Faces Class Action Suit
Majesco is in hot water as two of its' former employees have filed suit against the struggling company.
COMPANY RELEASES WEEK 2 CLUE!
MILLION DOLLARS ON THE LINE as Majesco’s “RACE TO SAVE HUMANITY” Play-and-Win contest hits week 2!
Advent Rising’s Marketing Savy
Advent Rising’s Campaign Shows Marketing Savvy.
Advent Rising Is Coming
The sci-fi action epic is flying to retailers. Go to your local game store and get this one asap!
Pre-E3 Majesco Unveils Lineup
Majesco has announced it’s E3 lineup. Majesco promises a little something for everyone.
Advent Rising Site Relaunched
Majesco has relaunched the official website for Advent Rising with lots of new information and a new look.
Majesco Delays Advent Rising
Majesco announced today they have shifted the release date of, Advent Rising, to the first calendar quarter of 2005.
Advent Rising to be Xbox Live Enabled
GameStop have been updated with a quick word that the game will be Xbox Live enabled.