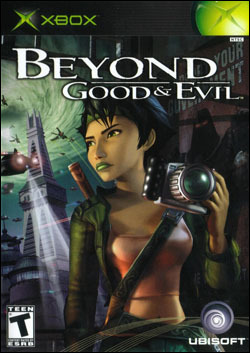 Have you ever opened a Christmas or birthday present only to find a pair of odor eaters and a 10 pack of tighty whities? Or maybe you found out your uncle Roger likes to wear red lacey things? Let?"

read more
Jade suspects there's more to the invasion of Hyllis than disclosed. Begin a journey to unravel the conspiracy. Your quest for the truth knows no bounds.
Marble Mini-game
Collect 88 Pearls on an Mdisk.

Overall: A lot of fun at first but gets old fast. A lot of walking around and taking pictures.I suggest renting before buying because this game is not for everyone.
Gameplay: A lot of walking or boating around in this one, not knowing what to do and where to go. There is a compass but it really doesn't help. I do like the idea of taking pictures for money but taking pictures does get old and sometimes is hard to do and get frustrating.
Graphics: I kind of like the cartoon look of the game but I feel they could have done a better job of it. The water does not look very good compared to Xbox standards.
Sound: Hardly any voice-overs, a whole lot of reading goes along in this game. There is no sound in the game except when you go into some of the buildings.

Overall: A very good game...another winner for Ubisoft. Very engrossing from the start and with a story, characters and the little extras that keep you coming back for more. I agree with fieldmobb561...this is the Zelda of Xbox.
Gameplay: Great controls, a slight learning curve with the vehicles or some items later on in the game. SOme stealth action gets kinda frustrating, but nothing some practice won't get you through. A little too short though.
Graphics: Graphics that strike a good level between cartoon and good 3-D. Wide expanses on water and in space are done well. The character animations are good and all look well...all the colorful creatures you can find are cool looking too.
Sound: The soundtrack has a timeless almost epic theme that sticks in your head...like Zelda...and all other voice acting and sfx are perfect for the setting.
Suggestions: Make a sequel that is longer. Ubisoft is on a role and I look forward to any and all future titles.

Overall: One of a kind game involving a cute lead character with a camera and a beautiful world to explore, and save.
Gameplay: Very easy controls, and an awesome camera. whether you are sneaking past guards or all out fighting, the camera is 98% always perfect. The interaction with the other characters and enviroments really submerge you into the game. I have to say, I was a bit sad when this game ended. It sucks you in that much. Havent had this much enjoyment in an adventure since tomb raider 2!
Graphics: Trippy, cartoony graphics that look beautiful on the Box. The cut scenes blended perfectly with the game play to the point that I sometimes couldnt tell when I was to start playing. Once you score the Beluga, you will truly appreciate the land in which your dwelling as Jade.
Sound: The voice overs were perfect. To tell the truth, I can't even remember what the music was like because I was so into the game.
Suggestions: Please continue this series. And put some dollars behind it. And of course, a few more gaming hours added would be sweet.

Overall: I have to admit, I wasn't exactly plussed about playing this game. It was mostly because I was ignorant of what it true nature was. All I knew was what little was reported from E3: Micheal Ancel, the genius behind the Rayman series, was making a game about a girl who saved her planet from despicable invaders by... taking pictures? That's the French for ya!

I was wrong to doubt. During the course of this game, I got to beat the snot out of alien baddies with a remarkabley intuitive set of bo moves, solve puzzles that were well thought and implemented, sneak around like Sam Fisher, compete in hovercraft races that put many dedicated racing games to shame, experience the wonder of space flight, interact with unique and interesting characters, and take part in scavenger quests that were more fun than tedious. Oh yeah, taking pictures was one of the most enjoyable parts of the game.

The feelings of immersion, adventure, and excitement this game creates are truly remarkable and rare. Every part of it is fun, interesting, and delivered in a way that is so cinematically beautiful, you'll wish it laster longer. Which is this game's only fault. It's so despicably short at ten to fifteen hours it seems criminal. I wish every part were exagerated or lengthened. I wish there were ten cities instead of one. Forty races instead of four. A hundred hours of gameplay rather than fifteen.

Of course, most games are just fine at ten to fifteen hours, any longer and their annoying qualities would ruin the entire the games as a whole. So maybe my discontent at its length is merely a reflection of the sheer quality of the product. Or maybe they should've given us another five hours of gameplay.
Gameplay: As I described before, you'll perform a multitude of different activities while guiding Jade on her quest to free her idealic planet from the alien conquerors. The main style of play is reminiscent of the latest incarnations of Zelda. You guide Jade through the world getting into battles and finding your way through various fantasy locations. The fighting, however, is done sans a lock on and I believe is more fun because of it. Along the way you'll upgrade different aspects of your character as well as her hovercraft which controls perfectly. There are a quite a few mini games, including one that resembles air hockey and is quite fun. Square could learn of few things about emjoyable mini games from Ubisoft.
Graphics: The unfortunate fact of the matter is this game's graphics betrays is playstation 2 roots. The fortunate fact of the matter is that it really doesn't matter. A truly gifted game designer overcomes technical weaknesses with truly inspired visual design. You'll encounter things in this game that will be hard to forget. I know I'll never forget the first time I entered the main canals of the city, watching as airships busily floating by and their reflections in the perfectly rendered water gluided with them.

The visual flaw with this game is that some of the characters don't match up to the visual bar set by the creation of Jade and some of her companions. If some of the uglier inhabitants had been rendered so beautifully, I'd give this a five easily.
Sound: First of all, the music is excellent. Never intrusive, it always seem to cue at the right moment and always fits in theme of the present visuals. There isn't a whole lot of it but is is of substantial quality.

The sound effects are likewise of high caliber. A good comparison would be to about any Star Wars game. I particularly enjoyed the sound of the hovercrafts laser cannons.

The voice acting is strong, but does sound wooden at times. Still, a valiant effort.
Suggestions: Make it longer, please. I'm sure a sequel is in the works, so please, give us more!

Overall: Great game for Zelda fans as well as Action game fans. The Graphics are crisp, the story is intresting, and call me strange but the usage of the camera is rather fun aswell. I must say I feel bad for the poor game since unisoft spent all its advertisments on Prince of Persia that this one will be over seen. But it is well worth buying or renting.
Gameplay: If you liked any of the Zelda titles on Nintendo 64 or Game Cube you will enjoy Beyond Good and Evil. The fighting is very similar. The movents are crisp, and it also has its small sometimes challenging puzzles. By diffrent ways of tranportation such as a hoover craft which you upgrade overtime, or even traveling by foot the game takes you to diffrent areas of the small planet and follows the storyline quite well. Plus I must say trying to take a picture of a boss before it chops off your head is quite amusing, gotta be quick with the zoom if you know what I mean! :P
Graphics: Many people are not to into the cell shading but I was amazed with the Visual effects, for once we have a game in which when a character is excited or sad it is seen in their facial expressions. Emotions are shown very nicely. When Jade is exvcited you will see it in her smile and the way she fluently jumps for joy. I was shocked to see a game in which the characters acting matched the situations unlike several games which have the monotone "oh no..Little Timmy has fallen in a well...oh shucks..."
Sound: Im not much of a person whom judges a game on its sounds, but from what I notice its soundeffects and soundtracks are crisp and clean. You know what situation your in with the soundtracks played, When the aliens strick you surer will now, the sounds of falling meteors and pulsing music surely scream get ready to fight.But as I said I not know much about the sound since I mainly play this game late night, dont want to disturb anybody in the house.
Suggestions: Great game, Definatly the Zelda of X Box, Very proud keep coming up with good games like Prince of Persia and Beyond Good and Evil.