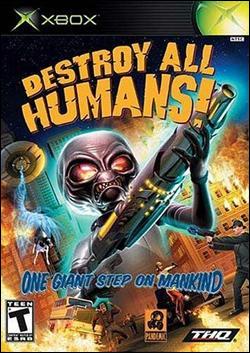 ?What can I say?I love those old school horror and science fiction flicks of the 1950s."

Overall: Fun game - The storyline is funky and refreshing, with due homage paid to the "B" sci-fi movies of the 50s... in fact, you unlock movie snippets from Plan 9 From OUter Space and others for finding lost "pods" throughout your travels.
Gameplay: The controls take a little getting used to, but not nearly as complicated as the finishing moves in many fighter games...

The HUD is clean and easily understood with just a few moments of gameplay.

The game offers unobtrusive hints and tips as you learn how to play, but you can always review the lessons in your "handbook".

You can really rack up "kills" since everything reconstitutes in the originating location... care to telekenetically hurl 100 explosive radioactive zombie cows? hang out long enough and they'll come back!
The respawning sort of hurts the DNA collection-for-currency theme, but it makes it interesting since you can't blast your way to an objective than just walk back to your UFO for another mission... you need to fight back, or sometimes evade and escape your way back to safety.

There are lots of cool powers and equipment mods you can get in the game. It's fun to perform the side-missions, and the banter from both the main character "Crypto" and his mentor/leader, Pox is pretty funny, too. The game is all about subtle jokes and throw-away lines.
Graphics: The visuals are good (8/10). The elements don't have as many polygons as some games, but there is a very rich, destructable environment in which to conduct your genocide/mayhem.

I give extra points for having a smooth visual game with so many actors running around.
Sound: The sound is OK - not hte best, but it's certainly acceptable. The music score is like something form the 50's sci-fi movies, so it certainly fits the mood. The sound effects are straight from the cheezy movies about interplanetary invasion.
Suggestions: I would like to save the game anytime, not just between missions (especially multi-part missions)

More equipment/skill mods would be fun... They don't need to be terribly powerful as long as they have funny/interesting effects.