Black Box, an Electronic Arts Inc. studio (NASDAQ: ERTS) announced today that the demo for the highly-anticipated SKATE 3 will hit Xbox Live Marketplace and the PlayStation Network on April 15th, 2010. The demo will give players a taste of the University District in the all-new skater’s paradise of Port Carverton. Players will shred through a series of single and multiplayer challenges including Domination, Own the Lot, and the bone-crushing Hall of Meat.

In addition to the modes and challenges, players can learn the ropes or perfect their skills in the all-new Skate.School featuring Coach Frank. Gamers can also sample the all-new object dropper by using 24 different items to tweak and alter the University District to create a personalized demo experience. Once players have that perfect trick nailed, they can capture the moment with the in-game Replay Editor and upload footage of themselves with the Skate series’ immensely popular Skate.Reel.

SKATE 3 is the definitive co-op skateboarding experience as players build the ultimate team to take on unique team challenges, compete against rival crews online and shred the streets. In the end, SKATE 3 takes skateboarding to a new level with more tricks, improved off board actions, and gnarly Hall of Meat carnage.

SKATE 3 hits retailers in North America on May 11th, 2010 and worldwide on May 14th, 2010 and is available on the Xbox 360 video game and entertainment system and the PlayStation 3 computer entertainment system. The game is rated "T" for Teen by the ESRB and "16+" by PEGI. More information can be found at www.skate.ea.com, become a fan on Facebook at www.facebook.com/skate, or follow us on Twitter @ Hippyjump. 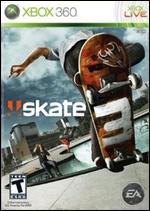