There’s still a lot left to find out about what games will support Project Natal when it releases this holiday season, but here’s one high profile title we might be able to put on the list: Ubisoft’s Ghost Recon: Future Soldier. According to French site JeuxVideo (translated version here), anonymous "sources" tell them the tactical shooter will include an optional mode that uses Natal motion controls.
Interestingly, this mode would apparently keep players using the 360 controller with one hand, while the other hand will be used for motions controls; one example given is you’ll be able to give your teammates orders using nothing but hand signals. If this is all accurate, it suggests Natal will be able to approximate something along the lines of the sort of "nunchuck" style setup that the Wii and Sony’s Move controller can both do with their analog stick attachments.

While this is all still unconfirmed, the fact that Ubisoft plans a heavy Natal assault this year makes it quite believable. If it’s all accurate, it’ll also be interesting to see whether the PlayStation 3 version of Future Soldier uses the Move as well. 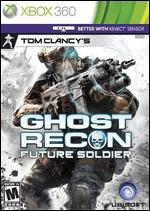