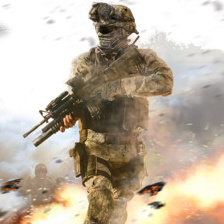 The second multiplayer map pack for Call of Duty: Modern Warfare 2 will be a timed exclusive for the Xbox 360. The Resurgence Pack will debut on Xbox Live in June.

The worldwide release date for the Xbox 360 version of this content is June 3rd. The Stimulus Package, the first map pack for MW2, was also a timed exclusive for the 360 and arrived on the PS3 and PC about a month later. I’d expect a similar delay here as well.

The Resurgence Pack will have five maps. These maps haven’t been identified yet, though. Considering it’s the same size as the Stimulus Package, it will likely be priced at $15 (1200 MS Points) as well.

In honor of the Resurgence Pack’s release, Infinity Ward will host two Double XP weekends soon. The first begins on May 28th and the second on June 4th.