It’s been a long time coming, but it looks like Splatterhouse finally has a release date set in stone. Namco Bandai has told GameSpot that the update to the classic gory side-scrolling action game series will be released for the PlayStation 3 and Xbox 360 this Halloween.
OK, so maybe "set in stone" isn’t quite accurate, since it’s unclear if Namco Bandai literally means Halloween as the release date (which falls on a Sunday this year), or the week before Halloween. But either way, the point is by October 31, Splatterhouse should finally be on store shelves.

It’s been a bumpy road to completion for the game, which was first announced back in 2008, and mysteriously yanked away from original developer BottleRocket in early 2009...only for Namco Bandai to later re-hire ex-BottleRocket developers to finish it anyway. At least we know one neat bonus the extra development time let the team do: add in the original Splatterhouse trilogy as unlockables. 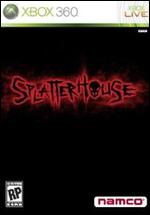