SaNTA MONICA, CA - Activision Publishing, Inc. (Nasdaq: ATVI) announced today that Little League World Series Baseball 2010, this year’s entry in the acclaimed hit baseball series, will be released this July for the Xbox 360 video game and entertainment system from Microsoft and the PlayStation 3 computer entertainment system. This is the first time the perennially popular Little League franchise has "hit" these systems.

"We felt it was time to finally bring the popular Little League series to gamers playing Xbox 360 and PlayStation 3," said David Oxford, Activision Publishing. "Little League World Series Baseball 2010 is visually stunning and packed with tons of new content, while remaining an accessible pick-up-and-play game for the whole family."

"Activision has been an outstanding partner because they listen closely to what real Little League players have to say about our videogames," Jud Rogers, Sr. Marketing Executive, Little League International. "This commitment to evolution is what makes Little League World Series Baseball 2010 an outstanding title of which our organization is intensely proud."

Little League World Series Baseball 2010 will be available this July for $39.99. The game is not yet rated by the ESRB. For more information, visit www.activision.com.

About Little League International
Little League International is the world’s largest organized youth sports program, with nearly 2.7 million participants, led by more than one million adult volunteers, in all 50 states and more than 70 other countries. Founded and headquartered in Williamsport, Pa., Little League’s goal is to bring the sports of baseball and softball to children and their families, instilling the values of teamwork, sportsmanship and fair play. While thousands of Little Leaguers have advanced to become Major League Baseball players, with some attaining induction into the Baseball Hall of Fame and Museum, Little League’s purpose is to create good citizens first. 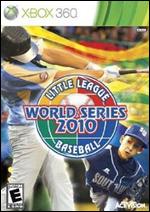