The World War I Flying Ace and his trusty Sopwith Camel makes their video game debut today in Snoopy Flying Ace for Xbox LIVE Arcade. Snoopy’s battle against the Red Baron jumps from the imaginary world of the comic strip and cartoons to a more fleshed out video game world that includes all the Peanuts characters, a collection of souped up bi-planes, and up to 16-player online multiplayer.

Snoopy Flying Ace, from SmartBomb Interactive, is 800 MS Points ($10) and includes features a solo and two-player co-op mode as the world’s most famous beagle takes on the Red Baron and his "Flying Circus". The game features ten different battlefields that are entirely historically inaccurate but include such famous landmarks as the Eiffel Tower and The Sphinx.

Aside from the online co-op, the game also features multiplayer up to 16 players with such game modes as Capture the Flag, Dogpile, and many more. Customization will also be the name of the game as you’ll be able to customize not only your plane with a dozen weapons but your pilot as well. You can use one of the Peanut characters such as Charlie Brown, Lucy, or Linus or even have your Xbox Avatar jump in the pilot’s seat. 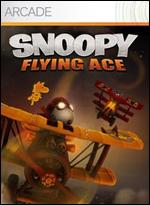