Activision and FreeStyleGames have now officially announced DJ Hero 2, set to come out sometime this fall. The "Party Bundle" for new purchasers will include -- say it with us -- two turntables and a microphone (along with the game). Those who already own one turntable controller from the first game can buy the Turntable Bundle, which includes an extra turntable controller and the game. The software will be available as standalone as well, though all signs point to the game focusing on using two of the controllers at once.
Featured artists will include Dr. Dre, The Chemical Brothers, Kanye West, Metallica, Lady Gaga, and Rihanna, among 85 others. Activision promises new social multiplayer modes and a freestyle mode. Players can also sample mash-ups from known DJs like Deadmau5, who will be featured as a playable character.

Those who are already scratching with the first game won’t have to wait for new content -- Activision is offering a DJ Hero 2 Mix as downloadable content for the first game. A mix of Lada Gaga’s "Just Dance" and Deadmau5’s "Ghosts ’n’ Stuff" will be available for free from June 8-14 on the Xbox Live Marketplace and PlayStation Store.

We can’t say the announcement is particularly surprising. In the last year we’ve heard rumblings of a sequel, followed by hints from DJ Guetta and even Bobby Kotick himself. Still, the sequel is coming sooner than most had anticipated, and it sounds like FreeStyle is working to make significant improvements to the original. 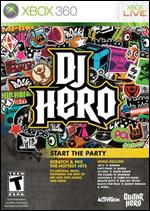