If you weren’t already snooping around the Internet and stumbling onto these Spider-Man: Shattered Dimension screenshots from last week, then this is new to you. Activision today confirmed that the 2099 universe (if you want to know what this means, hit up Marvel for a first step) will be the third dimension that the player visits in Spider-Man: Shattered Dimensions, in addition to the already revealed Amazing and Noir universes.

If you recall, the basic concept behind Spider-Man: Shattered Dimensions is that some mystic tablet gets shattered, and as a result, the player hops around four distinct universes, each with its own gameplay style and Spider-Man. The Amazing universe serves as the straightforward Spidey experience, with a fair mix of webslinging, fighting, and even a normal color palette. Contrast that with the Noir universe, whose concept has Spider-Man duking it out in the ’30s with a monochromatic palette, and whose gameplay is more stealth-oriented.

For 2099, it’s all about crazy neon and flying. Well, not flying exactly -- the technical term is, "controlled vertical freefalling." Basically, while Spider-Man webslings in other universes, for 2099, he spends most of his time falling and missing the ground in the process. The developers also comment that combat feels faster compared to the Amazing universe, and said combat utilizes advance Spidey abilities from the year 2099 such as enhanced senses (a.k.a. a bullet-time mechanic) and talons. Additionally, since each universe in the game features some villains designed in said universe’s style, the first villain we see for 2099 is a robotic (and created just for the game) version of Hobgoblin.

Expect the 2099 universe to be the centerpiece of Spider-Man for E3; we’re assuming that San Diego Comic-Con will be the place where the fourth and final dimension will be unveiled. Could it be the 1602 universe? Or maybe the Marvel Zombies universe? Or even the Sensational Spider-Ham? 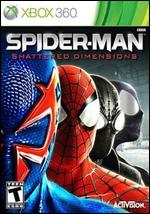