Strawdog Studios, an independent multi-platform game developer, is gearing up for the much anticipated release of its classically addictive Arcade game, Space Ark on Xbox LIVE Arcade for Xbox 360 on Wednesday 16th June priced at 800 points.

With your crack team of animal ‘arkonauts’, you have escaped your once peaceful solar system, which has been shattered by a wandering black hole, and are now looking for new places to live. With a trail of damaged planets left in the black hole’s wake, the space travelling animals board the Space Ark and fly across the galaxy on a mission to repair the damaged worlds. At each planet your arkonauts must bounce in the air and bag DNA combos, power-ups and all the fruit they can catch so ultimately inhabitants can return!

A fun homage to the bright and bouncy arcade games of the late 1980s such as Rainbow Island, Bubble Bobble and Arkanoid, Space Ark is an addictive, original arcade action game which appeals to both casual and hardcore gamers alike with its laid-back, stress free gameplay, and its addictive gem collection element.

All aboard the Space Ark! 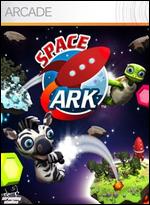