"We plan to profoundly evolve the interactive basketball experience in a way that the category has not seen for a decade," says Peter Moore, President, EA SPORTS. "In NBA ELITE 11, we’ll introduce a gameplay experience that gives fans the control on the court that they have been begging for in a basketball game for years."

Using the design principles from some of EA SPORTS top rated franchises, NBA ELITE 11 introduces several significant gameplay changes that center around user control. The new ‘Hands-On Control’ scheme allows for one-to-one responsiveness of a player’s movement and actions on the court, as opposed to traditional predetermined animations that require users to wait while a scenario played out before making the next move. Hands-on Control applies to everything within a player’s offensive and defensive arsenal, including: dribble moves, dunks, drives to the basket, fadeaways, mid-air adjustments, blocks, steals and more.

The new real-time physics system in NBA ELITE 11 allows each player on the court to move independently of one another, removing the two-man interactions that have long taken the user control out of basketball simulation videogames. In addition, a new skill-based shooting system requires accurate user input, based on a player’s position on the court, versus the randomly generated dice rolls that have driven shooting in basketball videogames in the past.

"NBA ELITE 11 will give gamers the same skill set that a pro basketball player has at his disposal," said David Littman, Creative Director, NBA ELITE 11. "This is the first basketball simulation videogame where you are controlling every movement, dribble move, shot, dunk, lay-up, steal and block in real time with one-to-one control. You’re no longer going to push a button and watch the computer generate a long animation sequence. It is like being on a basketball court with an amazing set of skills. This is going to change what people have come to expect from a basketball simulation videogame." 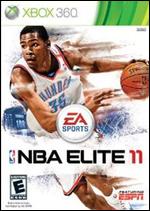